Hi-Ex 2011: Fourth Fling In The Highlands 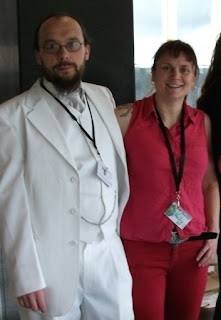 In 2007 when Richmond Clements and Vicky Stonebridge started planning their Highland Comics Exposition they can hardly have envisaged that they would still be at it four years later. That first Hi-Ex comics convention took place in Inverness' Eden Court theatre in February 2008 and Hi-Ex 4 will return there once again in 2011.

Hi-Ex has always supported the same charity over its three years, Children 1st, and this year the convention presented them with a cheque for £2331.35 raised by the charity auction, raffles, signings and various other activities over that busy weekend in March. This total more than doubled the amount that the convention had raised for the charity in its previous two years.

The dates for Hi-Ex 4 are 26-27 March 2011 and when it will be held in the Eden Court Centre on the banks of the Ness River in the centre of Inverness.

More details will be available on the Hi-Ex website closer to the time.