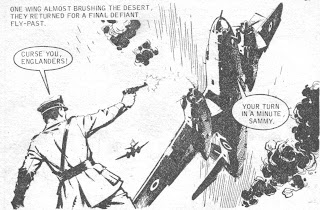 Earlier this year, to celebrate 40 years of artist Ian Kennedy working on the title, Commando reprinted four of the stories that he had illustrated for them.

Despite being their top cover artist, having painted around one quarter of all the Commando covers used over the title's near half century of publication, and having illustrated many stories in the various IPC combat Picture Libraries in the 1960s, Kennedy has only ever illustrated five Commando stories. With the other four reprinted in the comic in 2010 the Commando office decided to reprint the fifth story, The Sand Devils, on-line and the final part of the story has now appeared on the Commando Mag website.

The Sand Devils was originally published as Commando issue 832 in April 1974, written by R.A. “Monty” Montague with a cover not by Kennedy himself but by Carlo Jacono. The story is set in North Africa during World War II and follows the adventures of an RAF Marauder bomber squadron as they attack and are attacked by the Axis forces. Kennedy's aircraft art is typically dynamic and his renditions of the little known Marauder aircraft are superb. All 63 pages of the story are on-line beginning and you can read them for free beginning here. 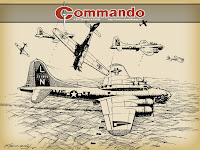 In addition to the ongoing story the website has started to include some of the single page illustrations by Kennedy that adorn the comic's inside covers. To tie-in with the D-Day anniversary this year the website put up a series of these pin-ups formatted as PC wallpapers including this illustration of American B-17 Flying Fortress bombers being attacked by Luftwaffe FW190 fighters.

Ian Kennedy's The Sand Devils begins here and his D-Day related illustrations are here and here.
Posted by Jeremy Briggs at 7:00 am