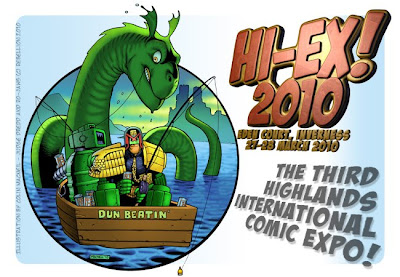 There was something missing at Hi-Ex this year - snow.

After two years of heavy snow either on or just before the convention's weekend, organisers Richmond Clements and Vicky Stonebridge pushed this year's date back from mid-February to the end of March and it worked - just. Saturday 27th March dawned sunny, dry and not too cold at the Eden Court complex in Inverness, and while the Sunday wasn't as bright, there was no snow. Even the Monday morning, for those travelling home that day, was also dry and sunny. It was third time lucky for Hi-Ex as the snow stayed away – at least until the Monday night, when lorries were trapped on the M90 motorway unable to climb the hills on either side of the Strathearn valley in Perthshire, the same road so many of us had driven south on in the 24 hours beforehand.

Snow really did seem to be the only thing missing from the convention this year. So what was there?

Stormtroopers - check; got to have those these days and there was even a Star Wars artist present as well.

2000AD artists from new young upstarts to those seasoned enough that they were about to retire - check; Brit-Cit had sent a Rad-wagon through the northern wastes to the wilds of Cal-Hab just to see them.

Female mangaka with long queues of youngsters wanting their portraits done manga style - check; were the manga queues longer than the 2000AD queues? Hard to tell but there can't have been much in it either way.

Goodie bags - check; good(ie) grief, will we ever forget the number of DC comics badges that were around the convention?

Old favourites like Cinebook with their wide selection of bande dessinee titles and Mark Stevens with his scratch build science fiction models - check. 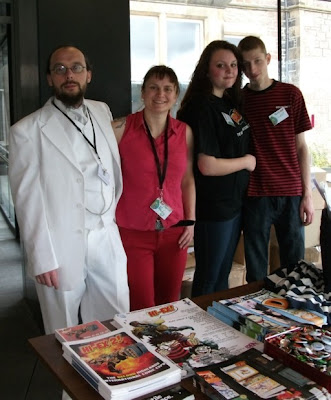 Hi-Ex certainly ticked all the boxes this year. Team Hi-Ex - Rich, Vicky, Ish and Lukas - did us all proud and hopefully we all did the Scottish children's charity, Children 1st, proud as well with the total amount to be donated to them easily set to beat the previous year's amount. Roll on next year.

The calm before the storm - final touches being put to the tables in the main hall just before the doors opened on Saturday morning.

Dandy and Beano artist Stephen White at his first comics convention checks out Graeme Neil Reid's table and gets a few tips on surviving a two day Scottish convention with your sanity (almost) intact from someone who has been at every Hi-Ex. 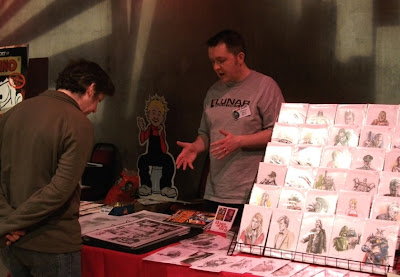 Stevie then started into sketches of various Dandy and Beano characters for an ongoing stream of delighted children. 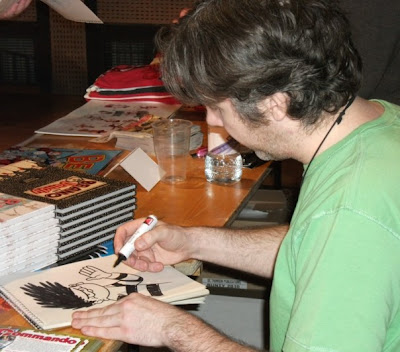 Meanwhile Graeme, who tends to do his sketches beforehand and puts them up on his blog, took the time to do several sketches on the Sunday including this one of Judge Death. 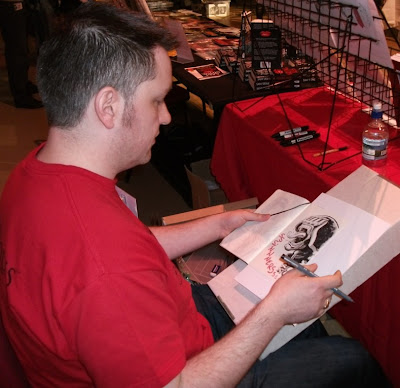 "Fun for all and all for fun", artist Gordon Tait, ex-Dandy editor Morris Heggie and artist Stevie White on the 'not the DC Thomson' table. 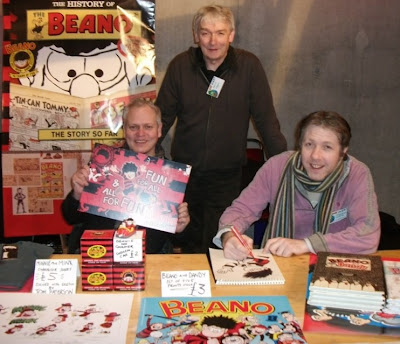 Opposite DCT was the DFC area with Gary Northfield, Dave Shelton, Jim Medway and Sarah McIntyre. While the Gerry Anderson fans in the crowd may have been wondering why she wasn't wearing a purple wig, Morris Heggie couldn't resist the chance to get a signed copy of Sarah's storybook Morris the Mankiest Monster... 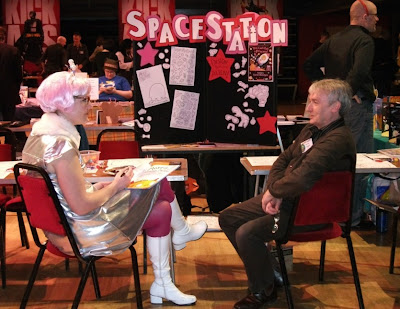 ...while the nearby wall began to show off the efforts of the children who were helped by Sarah to create space monsters over the two days. 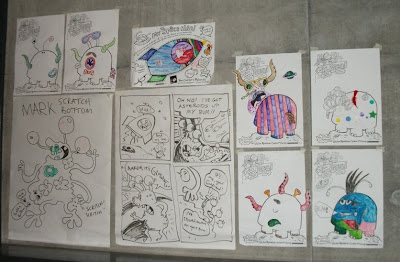 What does DFC stand for? Dodgy Fotographic Contortions? Sarah gets enthusiastic about photographing Dave and the resulting photo is on her blog and shows that this was actually worth it.

From Brit comics to Franco-Belgian and over at the Cinebook stall, Aldous shows off the latest translated Lucky Luke soon, no doubt, to top their sales charts... 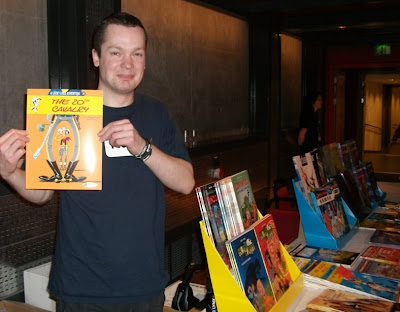 ...while at the other end of the table French artist Michel Rodrigue, in his first UK convention appearance, was busy sketching retired secret agent Clifton... 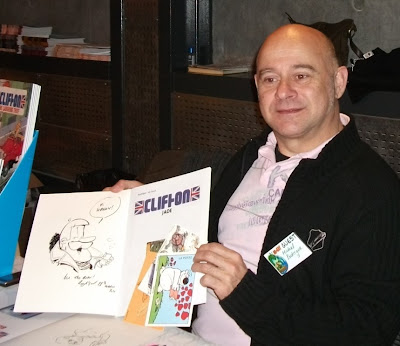 ...and his dishy sidekick Jade for those buying his Clifton books that have been translated into English by Cinebook. 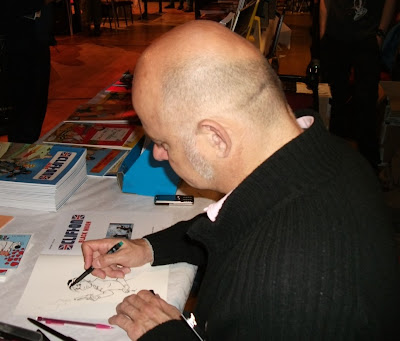 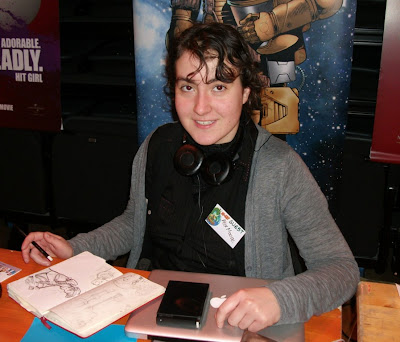 ...while Titan Star Wars artist Tanya Roberts was bright and ready to go on the Sunday morning when rather a lot of people were feeling the combined effects of the all-you-can-eat meal and the bar from the night before plus the jump to British Summertime that morning. 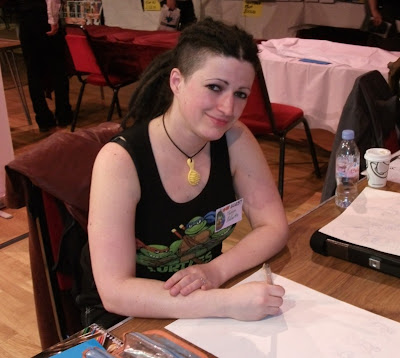 Beside Tanya was mangaka Inko all set for the queues of people wanting manga portraits of themselves... 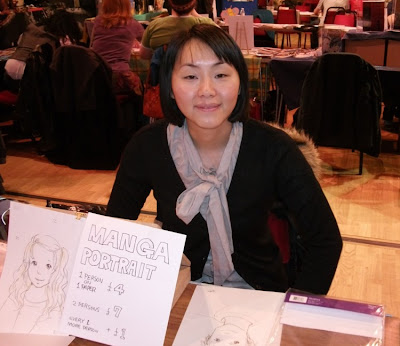 ... while around the corner Asia Alfasi was dazzling us with her smile and her lovely 'business cards', small scrolls with artwork on one side and her details on the other, all tied up in a red ribbon. 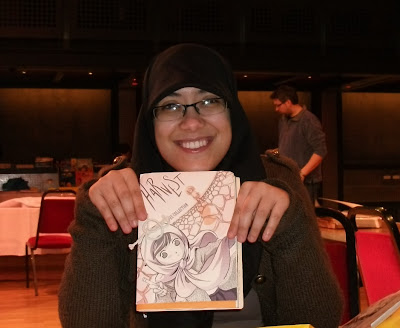 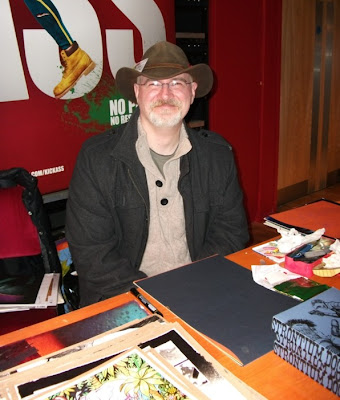 ...along with artists Simon Fraser and Charlie Adlard who all never quite seemed to loose the queues for sketches on the Saturday. 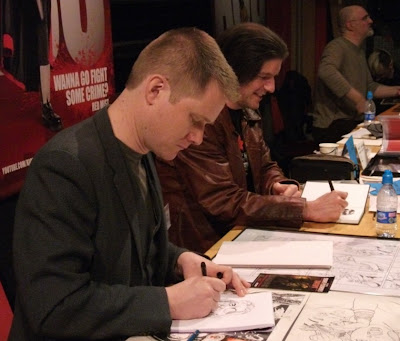 On the Sunday the group came together for a History of 2000AD talk which also brought in artist Cam Kennedy, who had been happily walking round the main hall and signing autographs, as well as artist John Higgins and writer Al Ewing.

If 2000AD and the Megazine wasn't enough Thrillpower for you then Dave Evans (BOLT-01) of Futurequake Press was on-hand with the latest issues of Zarjaz and Dogbreath which proved to be very popular. The Scotch Corner Art Blog was well represented with Graeme Neil Reid, Simon Fraser and here, Gary Erskine, behind tables all weekend along with a quick appearance by Tom Crielly on the Saturday. 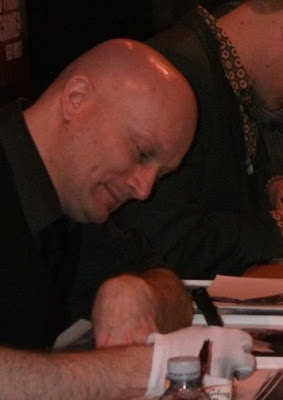 No one was going to miss Terry Martin and his text based Murky Depths magazine with the most impressive display of any of the tables... 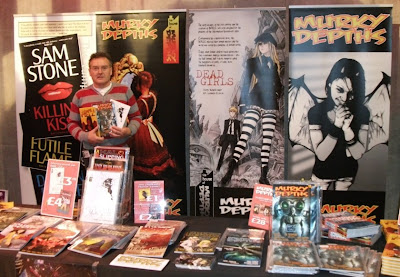 ...while Alpha Gods' Ian Sharman, having serenaded Thoughtbubble punters in Leeds last November, left his guitar at home this time. 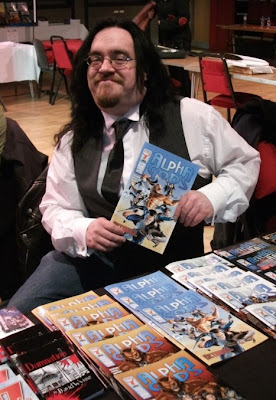 From small press to smaller press and the international duo of Kyle Rogers and Cliodhna Lyons who hail from the Republic Of Ireland, live in London and now sell in Scotland... 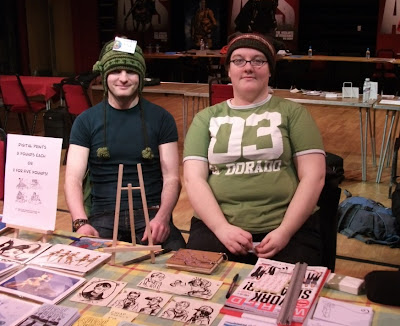 ...while Paul Thomson of the Newcastle-Upon-Tyne based Paper Jam Comics Collective had a wide selection of Paper Jam titles available as well as the critically acclaimed Omnivistascope which was trumpeting the fact that each of its five issues had been Fanzine Of The Month in SFX magazine. 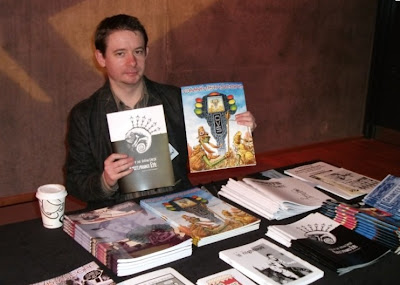 The 21st century fanzines that we call blogs were also present, downthetubes (obviously) included, but Joe Gordon of the FPI blog trumped us all by not just tweeting from the convention but also posting a blog piece up while in the convention hall itself. He may have thought he had hidden himself away in a dark corner in an attempt to recreate the atmosphere of FPI Edinburgh's blog cave but you can't hide from a long lens. 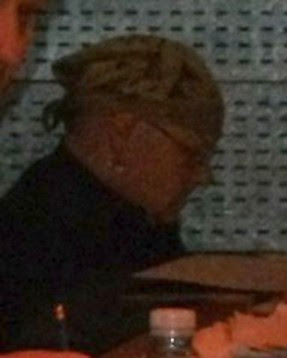 Meanwhile, in downthetubes' ongoing attempts not to show pictures of Stormtroopers pointing guns at people kneeling on the ground, here we have the horrified reaction of one Stormtrooper to the idea that there may be more than one type of rebel. 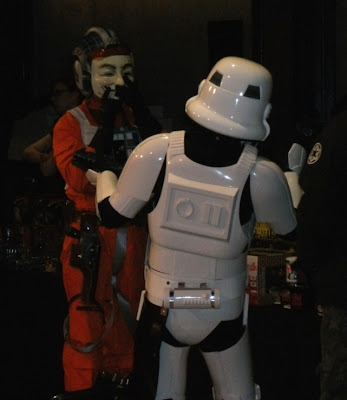 Of course, the thing to remember about the Eden Court complex is with its theatres, cinema screens, meeting rooms, bar and restaurant, Hi-Ex was never going to have the entire place to itself, which must have surprised and thoroughly bemused the patrons of the Inverness Operatic Society when they arrived on the Saturday afternoon to see the Society's performance of Titanic and were confronted with a varied selection of Stormtroopers, Zombies and Manga characters as they walked around the corner. 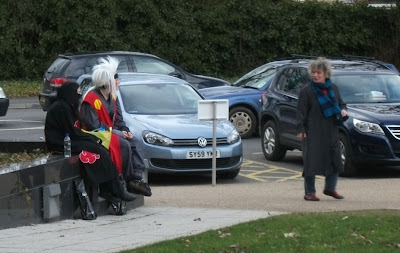 Whatever they thought, for us, as in its previous two years, Hi-Ex was great fun.

Posted by Jeremy Briggs at 8:25 am

Fantastic round up, thanks Jeremy! I really must get to one of these...