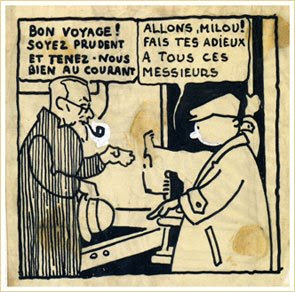 With Steven Spielberg working on a Hollywood film of the comic book hero, and an article in The Timessuggesting the young Belgian journalist is gay causing outrage in France "They have walked on TinTin!" opined Figaro), and the continuing debate over alleged racism in his early adventures (the PC brigade never seem to acknowledging that stories written in past times reflected the mores of those times without intentional malice), it seems there's no likelihood interest in Herge's character and his adventures will die away anytime soon.

For all the media-hyped controversy, TinTin continues to sell in the region of two to three million comic books a year more than 30 years after creator Herge drew his final adventure. Original editions are now sold for up to 40,000 euros. The stories have been translated into over 50 languages -- his adventures began to be re-released in Welsh last year for the first time in 25 years, starting with Cigars of the Pharaoh (Mwg Drwg Y Pharo) and Flight 714 (Awyren 714 I Sydney) -- with fans worldwide enjoying the adventures of TinTin, Snowy (who has been with him since his still controversial first outing, TinTin in the Land of the Soviets

), the cynical and grumpy Captain Haddock (first introduced in the Crab with the Golden Claws), Professor Calculus and other supporting characters such as incompetent detectives Thomson and Thompson.

As much as his adventures are treasured and adored, especially in France, TinTin owes much to his real world British connnections for his success. Herge's widow is now married to British businessman Nick Rodwell who took charge of Moulinsart, the business which holds the rights to all TinTin character merchandising and which turns over some 16 million euros a year and is fiercely protective of their rights.

As for the new films, Dreamworks bought the rights to all 23 albums last year and it's hoped the first will be released on 22 May 2011, that date also being Herge's date of birth.

A Tintin Festival is to take place in the Belgian city of Namur this May and an appearance at the Europalia China exhibition, which starts in October, will mark the wholesome hero's 80th anniversary. A new TinTin museum is to open on 2 June.

"Tintin is not 80. He will always be fifteen and a half -- he doesn't age," said Stefan Steeman, a collector of Tintin memorabilia and president of the Les Amis d'Hergé (the Friends of Hergé). 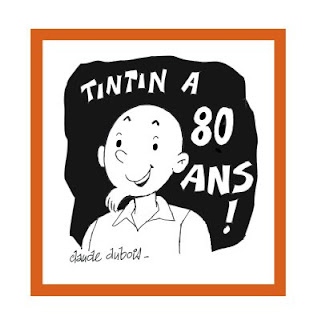 Comics creators have been quick to pay tribute with their own interpretations offering birthday wishes, including Claude Dubois (creator of the BD Sylvain et Sylvette, left), Neill Cameron, Steve Holland, the cartoonist at the Est Républicain newspaper, Janique Robitalle, Tozo and many, many more.

We're more than happy to join in and wish TinTin and company all the very best!

• Links to more 80th Birthday articles on Objectif TinTin (in French)
• Captain Haddock Curses
The complete list of Haddock's swears words and curses in English on TinTinologist.org
• Details of TinTin Translations
While it's true many of TinTin’s early adventures offered a distinctly white European view on the world (as these scans indicate), Hergé slowly moderated his views down the years. His friendship with a Chinese student, for example, saw him abandon many of his pre-conceived notions about China before he created The Blue Lotus

, and he even adapted some books as history changed to offer a more accurate portrayal of places. For example, in one adventure set in the Middel East, Scottish soldiers are replaced by Arabic military in later editions.
• How TinTin has been modified down the years (scans from the original versions of the stories)
• Images of some alternate visions of TinTin (post in French)
• TinTin Web Sites List on Free TinTin.net

Sorry i don't speak very well english. But thank you for the link.
http://opoto.org

Hi, I want to thank you for the link which you included towards my blog. It is a surprise for me to find it here and I really appreciate it. I'm glad that you liked my illustrations.