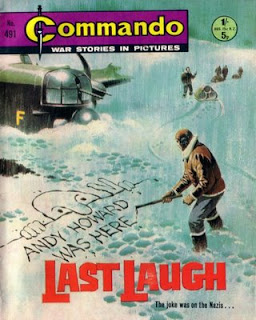 Over Christmas the boffins on the Commando Mag site launched a sneek attack under the radar and added a fourth complete on-line Commando story before they had even finished the third.

Last Laugh is a World War II story of the crew of a crashed Lancaster bomber as they try to evade capture by the Germans in occupied Norway. Written by Monty Montague, it was originally published as issue 491 in August 1970 and was then reprinted as issue 1427 in July 1980. Its tongue-in-cheek cover is by Ian Kennedy while the internal artwork is by Cam Kennedy.
This is the first time that the Commando website has put an issue on-line with internal art by an artist well known beyond the confines of the title with Cam Kennedy having produced work as diverse as Fighting Mann for Battle, The V.C.'s for 2000AD, Punisher for Marvel, Star Wars for Dark Horse and the more recent Kidnapped and Jekyll and Hyde graphic novels.
The site continues to add computer wallpapers based on Commando cover art to their range of images with more than 60 covers now available in this format.
Finally the Commando team are working on producing a binder or slipcase for collectors to keep the digest sized title in. We will bring you more details on these when we get them.
The on-line Commando, Last Laugh, begins here.
Posted by Jeremy Briggs at 3:07 pm