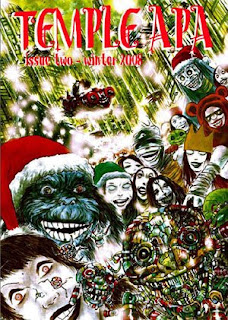 A team of indie British creators, banded together for some time now as the Temple APA, has just released a second issue of comics with the same name, available free in both low and hi-res PDF format.

The collection, which has a bit of a belated theme, is intended as a digital showcase of British comic writers and artists both amateur and professional and also UK small press comics.

Featured in this 38-page issue is the work of creators such as Tony Suleri, who provides the stunning cover, design work and more; Dave Hailwood, offering a new humour strip, Bunk Mates, set in a nuclear bunker; Adam Grose, showing off his new mystery adventure strip, Dragonfly, which has just launched as a web strip Paul Eldridge with Rubbernorc, including some new 3D interpretations of his most popular character; Jim Stewart; Malcolm Kirk, whose offerings include Clumsy Violent Idiot, a homage to Shiner from Whizzer and Chips; and Simon Mackie, whose Credit Crunch Christmas strip is a tale already raved about here.

Also included is a quick British Small Press Directory, useful for those of you trying to track down some of the higher profile indie titles at comics events or online.