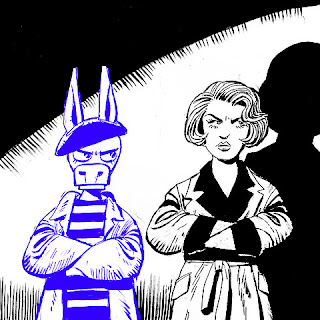 We will soon be interviewing British Comics artist Keith Page for a feature on downthetubes and would welcome questions about his career and work from fans.

Please send any questions to us by 31st January 2009 johnfreeman6-downthetubes@yahoo.co.uk - do not post them here.

For those not completely familiar with this accomplished artist, whose current projects include strips for Commando, Spaceship Away and his own strip, Charlotte Corday, still available on ROK Comics and now being added to Clickwheel, Keith offers this 'potted history' of his career to date... You can also check out his own blog at: keithpageukcomicsartist.blogspot.com

"I'd always wanted to draw comics," Keith tells us, "and started taking drawings up to Farringdon Street to what later became IPC. Eventually I was put on to Pat Kelleher of the Temple Art Agency, then in Chancery Lane, and I started to get a few Annual stories of various types.

"I worked as an artist in my spare time for a number of years, doing a completely different day job. I gradually built up quite a wide variety of work including tv adaptations for TV Comic and Mighty Max for Marvel UK. Together with some newspaper and book illustration work, I also drew for now-forgotten IPC titles such as Supernaturals, Mask and Wildcat.

"I became a full time comics artist when the late Alan Fennell asked me to work on both the IPC Thunderbirds comic and the long-running Sunday Times feature which later included Stingray.

"When this work ended, Pat found out that George Low was looking for a new Commando artist. I was sent a script and fortunately they've kept coming ever since.

"The work I've had the most fun drawing is my Charlotte Corday series, particularly the story written by Stephen Walsh which includes the 1950's London V-Cars, or Vampire Squad."

• Please send any questions to us by 31st January 2009 johnfreeman6-downthetubes@yahoo.co.uk - do not post them here.

• To read past interviews with Comic Creators on downthetubes, check this link page on the main downthetubes site
Posted by John Freeman at 10:07 am