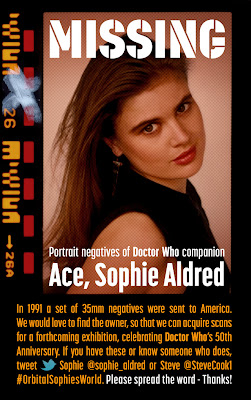 Brilliant photographer Steve Cook, whose design credits include Doctor Who Magazine and 2000AD as well as projects such as Alternity with Shaky Kane and whose 2009 Secret Origins exhibition of many British comic creators remains a superb snapshot of the industry, has just announced he will be exhibiting a series of previously unseen photographs of the Doctor's much-loved sidekick Ace, Sophie Aldred, at the Orbital Comics Gallery in London from 5th - 30th September 2013. Sophie will be making an appearance and signing too.

I commissioned Steve for several photo shoots while I was editing Doctor Who Magazine, and he went on to snap several photo sessions with Sophie and other Who stars – but, sadly, one set of negatives remains missing.

If you hear or know anything about these photos, please let Steve or Sophie know via Twitter: @sophie_aldred or @SteveCook1
Posted by John Freeman at 7:09 am