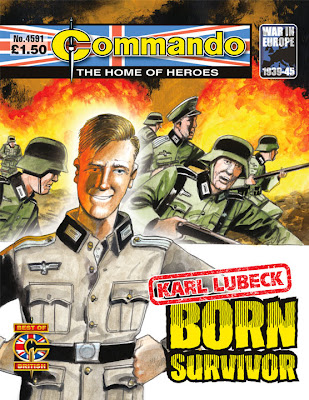 Karl Lubeck joined the German Army more or less by accident. He really wanted to be a civil servant and the Wehrmacht soon found out that he would have been much better suited to bureaucracy than battlefield.

It took the considerable efforts of a wily, experienced NCO to turn him into any sort of a commander. And keep his head on his shoulders.

Yet Karl would be the man who did what no other German officer managed… and lived to tell the tale. 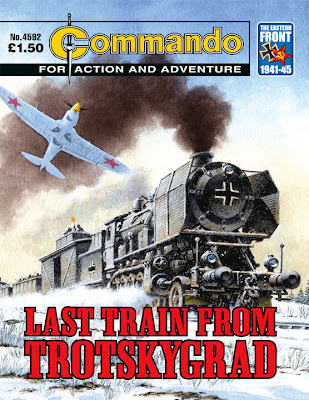 The war on the Ostfront was going badly for the Germans. Soviet forces had stemmed their advance and now the invaders were in retreat. As the withdrawal went on, it threatened to become a rout as desperate men sought to escape.

At an isolated railhead, nicknamed Trotskygrad by the Germans, was a group of such men. Men who had a final chance to get away. Men whose only chance of survival was the… LAST TRAIN FROM TROTSKYGRAD... 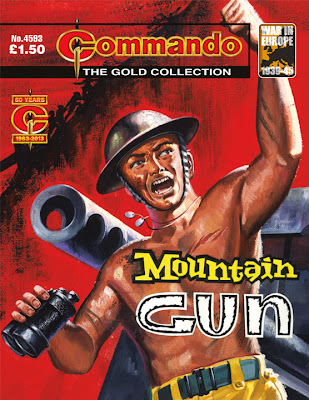 Sergeant George Lister was a gunner who didn't know much about fancy talk and smart saluting. He was a bit lost when men spoke of tactics, of fast-moving mobile artillery, of the intricate calculation needed to work out long-range bombardments.

But when the going got rough and his troop was left alone and on foot to drag a ton of gun up the sheer face of a mountain behind enemy lines - then! - it was Geordie's massive shoulders, raw courage and bull-roar of command that drove every man to sweat blood doing the impossible!

“What makes a perfect Commando? That question is often posed, but can never be answered,” notes editor Calum Laird of this re-presented tale. “There is no magic formula. This story, from the sure pen of Eric Hebden, does have many of the ingredients, though. A young officer at odds with a veteran NCO, a vital but nigh-impossible mission - ideal Commando fare.

“A strikingly coloured cover by Ken Barr and accomplished inside art by Gordon Livingstone help push it further towards perfection. But even if it's not completely perfect it's a belting story which I know you'll like.” 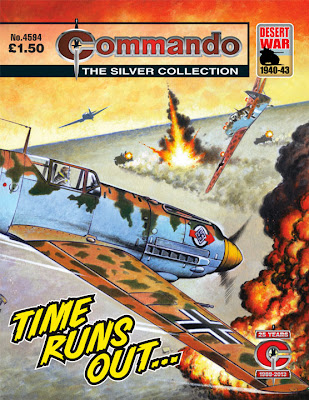 At top speed the four British jeeps raced across the sand. Travelling by day was risky but these desert raiders had vital information that had to be relayed at all costs.

Then three Me109 fighters pounced, unleashing a vicious hail of bullets. The leading jeep took a burst, exploding violently. Two more were quick to suffer the same fate.

Now only Sergeant Dan Smith's team remained. And against such venomous opponents, it seemed their time had run out too…

“A ticking clock - albeit here a metaphorical one - is a good story-telling device, immediately heightening tension and drama,” feels Deputy Editor Scott Montgomery. “Here our desert raider heroes must get vital gen about a target back to HQ but are up against the odds at every turn.

*Saving based on discounted Direct Debit price compared with shop price. First quarterly payment discounted by 50% at £12.50 and £25 per quarter thereafter. UK bank accounts only. One year discounted subscription rate of £99.
Posted by John Freeman at 8:30 pm