May the 4th be with you!

Opening on May the 4th (Star Wars Day) and ending on 25th May (the 30th anniversary of Return of the Jedi), Manchester's award winning Generation Gallery will be hosting an art event with a difference.

Generation Gallery will be flying the official Star Wars fine art collection over from America, each piece of art is accompanied by certification from Lucasfilm, original artwork as well as pieces limited to less then 95 worldwide will be on show.

“The 14th is also George Lucas’s birthday so the month of May is turning into a Star Wars extravaganza," says Robert Marks, Gallery Manager. "We are the only art gallery in the UK with this collection so we envisage this event being hugely popular."

Lucasfilm have worked with some very exciting artists for this collection including one of Hollywood’s most impressive illustrators, Ryan Church. Ryan not only created the concept artwork for the most recent Star Wars films but many of Hollywood’s latest blockbusters including Avatar, Zero Dark Thirty, Transformers, War of the Worlds and more.

Fans from all over the country will be attending the invitation-only launch event on the evening of the 3rd May, where they can mix with Darth Vader and a squad of his Stormtroopers while enjoying the artwork. 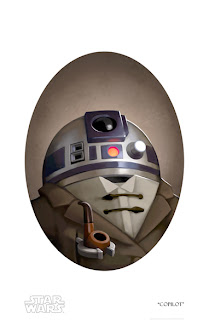 • Generation Gallery, New York Street, Manchester, M1 4BD. Web: www.generationgallery.com. The exhibition is free to attend. Tickets to the opening event are free but fans need to call 0161 247 7870 to be added to the guest list.
Posted by John Freeman at 6:57 pm