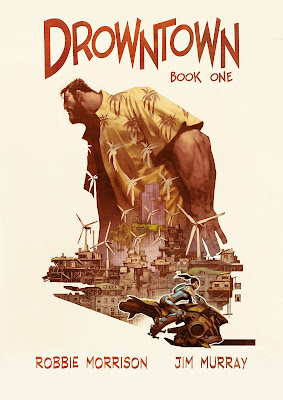 (with thanks to Simon Fraser): Jonathan Cape will publish the first volume of Drowntown by Robbie Morrison and Jim Murray in June.

The creators describe the series as "an epic adventure set in a flooded futuristic London that hurls down-at-heel minder Leo Noiret head first into a web of intrigue, murder, conspiracy, revenge and psychotic talking chimpanzees."

In Drowntown, the world has changed forever, ravaged by climatic upheaval. The flooded metropolis of London has adapted to the rising sea levels, remaining a centre for international commerce and a magnet for environmental refugees. The elite gaze out over the ever-expanding Thames from their ivory towers, while the denizens of submerged pubs peer into the sunken streets like specimens in an aquarium.

Hired by notorious underworld figure Alexandra Bastet, Leo Noiret - a Minder - uncovers a terrifying conspiracy that stretches from the depths of Drowntown to the highest echelons of power and influence.

Struggling aqua-courier Gina Cassel learns that young love can be a dangerous game when she becomes romantically involved with the heir to the Drakenberg Corporation, which aims to control both the environment and the future of human evolution.

There's a storm brewing in Drowntown, with Gina and Noiret at its heart.

Robbie and Jim have set up a blog to detail progress on the project offering insider art, designs and more at http://drown-town.blogspot.co.uk

Neither creator should require much introduction to DTT readers.

In a 19-year career, Robbie Morrison has created many popular series/characters, including Blackheart (art Frank Quitely), Shakara (art Henry Flint), and The Bendatti Vendetta (art John Burns), is a regular writer of Judge Dredd, and has scripted Batman and Spider-Man. He recently worked with Dave Gibbons on the Watchmen artist’s digital comic, Treatment for Madefire.

New editions are planned in Europe and the US of his critically acclaimed World War 1 Graphic Novel White Death, co-created with Walking Dead artist Charlie Adlard.

Jim Murray is currently working for computer games company Valve, where his credits include the stunning Dota 2: Are We Heroes Yet, which you can read online here - check it out, it's absolutely gorgeous. DTT readers may know him better for his mainly fully painted comic and cover artwork for the publications 2000AD, Judge Dredd Megazine and Batman graphic novels.

• Drowntown Book 1 is out in the UK in June. Pre-order your copy at your local book or comic shop, or or at Amazon.co.uk