Radio interviews with James Moran and VS Comics creators 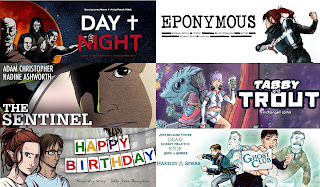 Continuing a month of shows about webcomics, Alex Fitch talks to screenwriter James Moran (Cockneys vs Zombies, Torchwood) about his new webcomic Day + Night, an urban vampire tale that casts the creatures of the night as 'sharks on legs' rather than the sparkly urbane figures found elsewhere. Also, in a panel recorded at Thought Bubble 2012, Vs Comics editor Mike Garley talks about the strip he's writing - Eponymous - and introduces creators Nich Angell (Tabby and Trout), Ned Hartley (Ghost Club), Adam Christopher (The Sentinel) and Sally Jane Thompson (Happy Birthday) who present the strips they're contributing to the online anthology comic, with the help of designer Mike Stock.