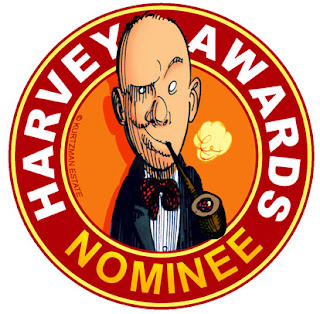 The Executive Committees of the Harvey Awards and the Baltimore Comic-Con have just released the official Nomination Ballot for this year's Harvey Awards, honouring work published in the 2012 calendar year.

Named in honour of the late Harvey Kurtzman, one of the US comic industry's most innovative talents, the Harvey Awards recognize outstanding work in comics and sequential art.

The 26th Annual Harvey Awards will be presented Saturday, 7th September 2013 as part of the Baltimore Comic-Con.

For the first time, Harvey Awards nomination ballots may be submitted using an online form. If you are a comics professional, you can vote online at  harveyawards.org/2013-nomination-ballot/. This will enable an easier and faster method for the professional community to submit their nominees.

Ballots are due for submission by Monday 6th May 2013 - and there's nothing to stop British comic creators or publications being nominated, so why not do so...

Additionally, if voters would prefer, ballots may be downloaded from the same page, completed, and sent via postal mail or e-mail.  All methods of submission are permitted.

Nominations for the Harvey Awards are selected exclusively by creators - those who write, draw, ink, letter, colour, design, edit, or are otherwise involved in a creative capacity in the comics field. The Harvey Awards are the only industry awards both nominated and selected by the full body of comic book professionals.

In addition to being available on the website, ballots will be sent to all major publishers and distributed at comic conventions. We look forward to your participation and input in this process, and we look forward to seeing you at the Baltimore Comic-Con and the Harvey Awards.

Companies and individuals interested in sponsoring the 2013 Harvey Awards may do so by contacting us at harveys@baltimorecomiccon.com.

The Harvey Awards are one of the US comic book industry's oldest and most respected awards. With a history of over 26 years, the last eight in conjunction with the Baltimore Comic-Con, the Harveys recognize outstanding achievements in 22 categories. They are the only industry awards nominated and selected by the full body of comic book professionals.
The Baltimore Comic-Con is celebrating its 14th year of bringing the comic book industry to the Baltimore and Washington D.C. area. For more information visit www.baltimorecomiccon.com.