London's Comiket is back - bigger and bolder than ever! 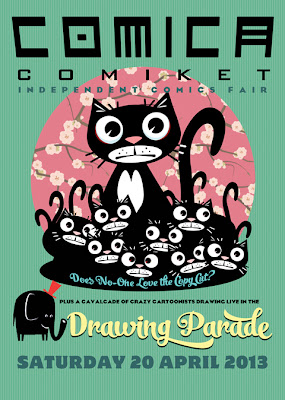 London's Comiket is back on 20th April 2013 - and the Comica Festival-organised event has a new and much bigger venue.

This year, they've teamed up with Central Saint Martins College of Arts and Design to stage the biggest and best Comiket Independent Comics Fair yet, in their spectacular new headquarters, mere minutes away from King’s Cross rail and tube stations.

Spring Comiket will again offer the opportunity to discover the very best in comics and enjoy the Drawing Parade of superstar artists, all for free.

With lots more space in the Platform Theatre in Handyside Street, London N1C 4AA and the adjoining Studio and Foyer, complete with convenient and affordable all-day Student Bar and with the White Lab space right next door too, Comica say they can present a wider range than ever of creators, publishers, exhibitors and events throughout the day.

"We’re also programming an extra session of Comica Conversations on the Friday afternoon, April 19th," says Paul Gravett. "Sign up to the Comica Newsletter on our web site for exclusive details of who’s participating and how you can join the audience.

Meantime, now’s the time to book your tables, at the same rate as before and at the width of 160cms by 68cms. Comiket is a premium event and major attraction of Comica Festival, a not-for-profit social enterprise promoting public appreciation of and involvement with the comics medium in all its forms.

• To book a table, visit this page on the Comics web site
Posted by John Freeman at 12:35 pm