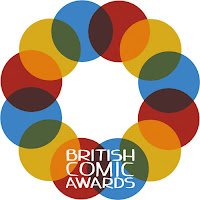 Plans for the second annual British Comic Awards are well underway -- so here's a reminder that you can nominate titles for consideration by the BCA Ccommittee via the Awards  Nomination Form or on the BCA home page.

"We believe we have a great range of skills and interests on the Committee,' says Adam, "meaning we should be able to cover every aspect of British comics, delivering a nominations list to the Judges that represents everything that is magnificent and vibrant about British comics in 2013."

What has been your favourite British comic or graphic novel since last September? What treats have you bought at a comic show or received for Christmas? If you're a creator, what work have you made that you’re especially proud of? Let the BCA know.

Any title by British creators published between 1st September 2012 and 31st August 2013 are eligible as long as the rights remain in the UK. Please check the Qualifying Work page for further info.

Please note this isn’t a most-votes-win process, this is a nomination process, you only need to nominate a title once and creators and publishers can nominate their own work too. You can send the BCA numerous (different) suggestions from now until the 31st August.

The 2nd Annual British Comic Awards will be held on Saturday 23rd November 2013 at the Thought Bubble Festival in Leeds, UK.