Comic Classics in the Spotlight – 2000AD 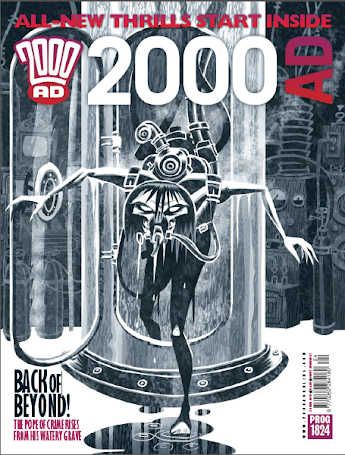 By Matthew Charlton (re-published with permission from thefictionstroker.wordpress.com)

2000AD is one of the UK’s leading weekly comics. It has been publishing for 36 years now. The anthology approach and cast of colourful characters have been crucial to its longevity. Snarky Judge Dredd, effectively the comic’s lead character, has gone down in legend and was recently brought to life by Star Trek‘s Karl Urban in a critically acclaimed film.

2000AD doesn’t take itself too seriously. For example, its own brand of slang has become legendary throughout the comic world. Instead of issues, 2000AD does Progs and the all-mighty alien Tharg sits in the editor’s chair.

Jumping into an on-going comic at Prog 1824 might be daunting, but 2000AD regularly cleans the decks and has jumping on points for new or lapsed readers. Prog 1824 is one such point with four tantalising opening instalments.

Judge Dredd is the lynch pin of the comic. As the only regular fixture, stories take their time to develop and aren’t afraid to rock the established Dreddverse with their layered politics. It is with a little surprise then that ‘Cypher’, this week’s adventure is a punchy and fast moving episode with an assassination attempt and a thrilling chase sequence that sets up the next instalment nicely.

Dashing dandy Dandridge – a merger of Derek Acorah and Jason King – is being pursued by the Police who are in search of a stolen Faerie blade in ‘The Copper Conspiracy’. This highly entertaining strip is reminiscent of the flamboyant ITC series of the 70’s, and ought to be terrific fun if this first episode is anything to go by.

Next up is Tharg’s 3hrillers – three part stories akin to Tales of the Unexpected. With more than a touch of The Big Bang Theory about it Part 1 of ‘Survival Geeks’ entertains with its pop culture references and light tone. An unlikely cross-over between Skins and Sliders, it’s sure to raise a few chuckles.

The final strip is Ian Edginton and D’Isreali’s Stickleback. ‘Number of the Beast’ which re-introduces cover star Stickleback – the self-styled ‘Pope of Crime’ (How timely given this week’s news!) as he is brought back from the dead. But the world has changed whilst Stickleback has slept...

Easily my favourite of the four strips, Stickleback is slightly confusing due to the sometimes unclear, yet gorgeous, black and white art and assumed familiarity with the set-up. However, the strip drips atmosphere and the mayhem looks like it has only just begun.

Overall, this is a great jumping on point with reader-friendly entry points, and some damn-fine characters to meet. And with the return of fan-favourite Zombo next week, there’s even more Thrill-Power to tempt you over the coming weeks!