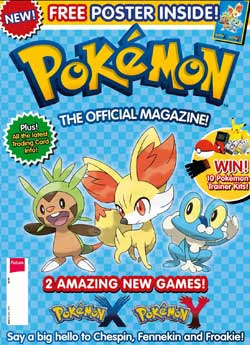 Future are gearing up for their launch of the Official Pokemon Magazine, with Issue 1 set to go on sale on 20th March.

With entertainment content including video games, the Pokémon Trading Card Game, a TV series broadcast on CITV, movies and toys, Pokémon is one of the most popular global children’s entertainment properties in the UK.

One of several 'evergreen' franchises, frequently 'reinventing' itself to gain new followers (Lego, Transformers, Doctor Who, Power Rangers could also be considered such), the Official Pokémon Magazine is the latest print launch from Future and will tap into the global Pokémon phenomenon.

Future say the magazine will be a one-stop shop for everything Pokémon, providing UK fans with the ultimate guide to all the latest Pokémon video game, TV series, film and Pokémon Trading Card Game information.

Each magazine will also feature activities, puzzles and competitions, and each issue will come with a Pokémon-themed cover mounted gift.

Priced at £3.99 the Official Pokémon Magazine will have a print frequency of 13 issues per year and will sit within Future’s Entertainment Group which comprises film and video game titles, including Official Nintendo Magazine and its related properties. The magazine will be edited by Editor-in-Chief, Chandra Nair.

Lee Nutter, Group Publisher for Future’s Entertainment Group, says: “It is absolutely fantastic for Future to partner with an international brand as renowned as Pokémon and to be provided with the opportunity to bring the official magazine to the UK market. Pokémon has never been bigger and more relevant than it is today and the magazine will serve as the voice for its UK audience.”

Heather Dalgleish, Director of Publishing at The Pokémon Company International, says: “We’re delighted to be collaborating with leading publisher, Future. Their extensive reach in the market ensures that the Official Pokémon Magazine can be enjoyed by Pokémon fans across the United Kingdom.”