Publish and Be Dammed returns to the ICA 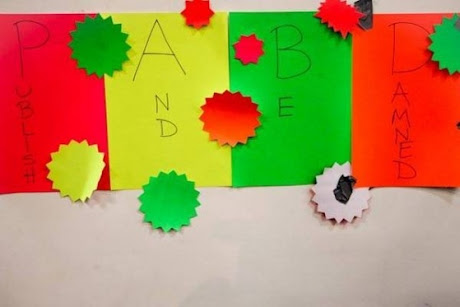 The annual Publish And Be Damned self-publishers fair returns for its second year to London's ICA on Saturday 2nd March. The fair features over 50 publishers with experimental editorial directions and distribution strategies operating outside the mainstream.

While most involved appear to be non-comics related, the event will be of interest to creators looking at ways to distribute and market their work, whatever their content.

Artists videos are installed throughout the fair, playing with ideas of automatic writing and instant publishing and showing new work by Fiona James, Clunie Reid, Erica Scourti, Anne Tallentire, Duncan White and Camilla Wills. Reflecting upon practices of writing and distribution, and teasing out the relationship between experimental writing and publishing practices, this installation of silent video will serve as a starting point for talks and discussion at an upcoming ICA Friday Salon.

Curated by Three Letter Words and Duncan White. Organised by Publish And Be Damned in association with the ICA. Special thanks to The Block.

A panel discussion with Chicks on Speed's Anat Ben-David, Sean Dockray, architect of aaaarg.org and organiser of the LA branch of The Public School, and artist and writer John Russell, focussing on the relationship between publishing and academic research. Chaired by art historians Alison Green and Joanne Morra.

Organised by PABD/Three Letter Words in collaboration with the Practices of Writing and Publishing research group at Central Saint Martins and in association with the ICA.

The talk in Cinema 1 is followed by a workshop in the ICA Studio. Participants will produce a publication that documents the events of the day and addresses such issues as the role of circulation and sociability in the 'production of knowledge' and the efficiency of alternative modes of writing and distributing art criticism. Workshop participants will join Central Saint Martins postgraduate students to produce an 'instant publication' that will be launched in the ICA Bar after the fair.

Workshop run by Alison Green and Rebecca Harris. Organised by PABD/Three Letter Words in collaboration with the Practices of Writing and Publishing research group at Central Saint Martins and in association with the ICA.

This screening brings together artists' films and videos in which typography plays a central role. The screening will look at how typography has been used to shape new aesthetic relationships between image, text and time, and how viewing moving image might be considered as a process of reading as well as looking. Selected by Fraser Muggeridge and Will Rose.

Join us for DJing in the bar, plus readings from PABD members' publications, and the launch of I don't want to write a PhD - a publication based on the talk earlier in the day and produced as part of a workshop in the ICA Studio.

Email ThisBlogThis!Share to TwitterShare to FacebookShare to Pinterest
Labels: Events London, ICA, Publish and be Dammed