Vengeance, Hollywood heroes and Spoons? It's your latest Commandos! 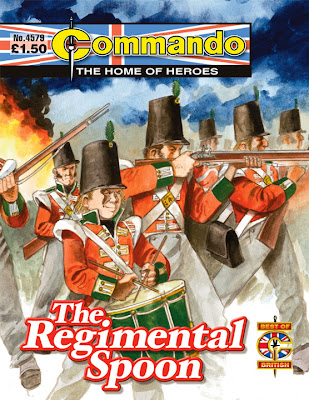 The latest issues of war comic Commando are on sale now in all good newsagents, and digitally via iTunes for iPad and iPhone. Here's the rundown - and you can now also read a preview of each issue and "try before you buy", via the Commando web site.

Soldiers' lucky charms and mascots come in all shapes and sizes - from medallions to pet goats and all things in between. But surely one of the oddest objects to become a talisman of good fortune was a spoon. Yes, that's right, a humble spoon.

Don't believe it? Well, between these covers is the story of how this kitchen utensil went to war with generations of the same family - and returned home safely every time.

Make up your own mind if the tale is true. 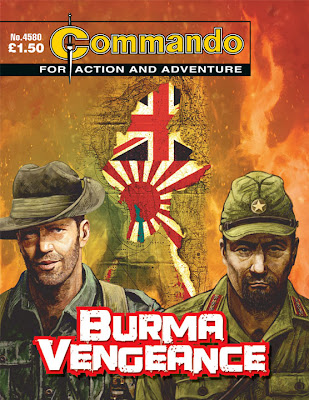 In the dense Burmese jungle, British troops were being driven back towards India, their spirits sapped by a series of defeats at the hands of the advancing Japanese.

Corporal Dan Farley had been left in command of a group of fearful survivors. They expected to be killed at any moment…but then a grizzled veteran Sergeant - ruthless and tough - came of out of nowhere to save their skins.

Dan wanted to be like this lethal newcomer, but the mysterious NCO was on a mission of his own. He had a score to settle with a brutal Japanese Colonel. This quest was personal and it could only end in death… but whose? 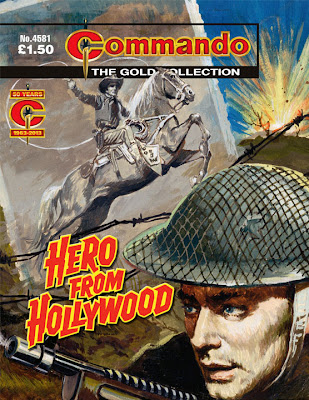 Almost every man has a hero…the one bloke in all the world he'd give his right arm to be like. Corporal Joe Brent's number one he-man was the big, granite-fisted American film-star - Chet Marvin.

In the days before the war, Joe queued up to see every movie he made, and marvelled at the sheer guts of the man.

Then, one day in 1941, against a background of exploding German bombs and throbbing aero-engines, Corporal Joe Brent and his celluloid hero met face to face. It should have been the greatest day in Joe's life.

But this was no Hollywood film set. This was war! And when the shot and shell are no longer blanks, it's easy to sort out the men from the boys…

"A little bit of 'conspiracy theory' never goes amiss in Commando and author Eric Hebden takes full advantage here with his invasion that never was," reflects editor Calum Laird on this reprint story. "The main thrust of the story, though, is a hero with feet of clay - or a bad case of the jitters - and he manages that with equal aplomb.

"The art is strong, inside and outside, by two men who handle the drawing of horses with the same skill as Hebden handles the story. And horses, as the best of artists will tell you, are tricky beasts to capture.

"Giddy-up and get reading!" 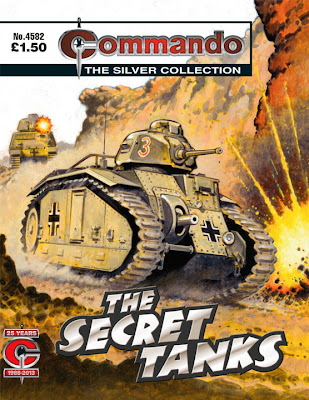 The French Char-B tank was one of the best fighting vehicles of the Second World War. But France had surrendered in 1940 so why were there a lot of them in the desert in 1943? And why did they have enemy markings? It was a secret which the Germans were determined to hide but which the Allies were equally determined to uncover.

"This solid tale features a story-telling device that works well in Commando - the linking of World War II with the Great War which had ended a little over twenty years previously," notes deputy editor Scott Montgomery. "Here, the connection is a fighting father and son, and the dependable sergeant that served alongside them both.

"Then, of course, throw into the mix the 'Secret Tanks' of the title - great, clanking French Char Bs - and we have a classic in the making.

"Commando legend Gordon Livingstone's art is up to his usual high standard here, and shows his versatility in drawing action and adventure, whatever the conflict."

*Saving based on discounted Direct Debit price compared with shop price. First quarterly payment discounted by 50% at £12.50 and £25 per quarter thereafter. UK bank accounts only. One year discounted subscription rate of £99.
Posted by John Freeman at 8:30 am