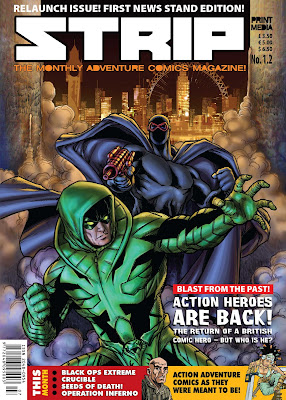 STRIP Magazine is heading for the UK news stand at last - with a launch date of 28th March 2013.

While the move to get the magazine into WH Smiths and other stores has been delayed several times, Bosnian-based comics publisher Print Media seems confident it has overcome its delivery issues and its owner, Ivo Milicevic, says he is ready to bring the adventure anthology to newsagents is finally underway, after a “test run” of seven issues in UK comic stores.

The line up of the monthly anthology magazine will be a mix of action adventure, science fiction and fantasy strips, alongside feature material about the world of British comics, including the continuation of Black Ops Extreme, centred on a secret anti-terrorism team; Crucible, a creator-owned story described as “science fiction - with swords!”; teen heroine thriller, Warpaint; and the return of 1970s action hero King Cobra, in all-new stories, under license from original publisher DC Thomson.

Plans and strips for the Magazine are fully commissioned for the next 12 months but include:

Continuing the adventures of a covert military unit taking on terrorists across the globe - but facing its own troubles with a possible traitor in its midst!

A major action hero for DC Thomson who first appeared in Hotspur in 1976, a new King Cobra takes on old enemies and new

A homeless teen finds herself drawn into a cataclysmic struggle between mankind and elemental monsters bent on the destruction of our world. 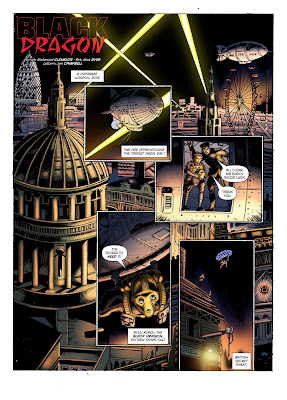 British and French steampunk spies take on the might of the dangerous Prusssian Empire in a feature-length adventure starring teen ninja Black Dragon!

• Crucible by John Freeman and Smuzz

Spurred by personal tragedy, humanity’s very existence is threatened with destruction when fast-growing plants are released, wiping out all organized centres of civilisation!


Strips in the pipeline include Dragonrir, a stunning fantasy tale by Miljenko Horvatic and Damir Zitko; a thrilling story of the criminal underworld, Deliverer, by Miljenko Horvatic, drawn by Bernard Kolle; WarWorldz by Stephen Walsh and Giancarlo Caracuzzo; the tale of an ancient warrior battling magic, Thracius, by James Hudnall and Mark Vigoroux; plus the return of other strips, including Age of Heroes by James Hudnall and John Ridgway and The Devil's Heritage by Jerome Felix and Paul Gastine.

"I am really excited our plans for STRIP Magazine are finally developing as I planned three years ago" says publisher Ivo Milicevic. "There is no certain formula for success, but the Magazine will have some good stories and really great art.

Ivo, who grew up with British comic characters such as Black Archer, Steel Claw and The Spider, which were reprinted extensively in former Yugoslavia, has been working in publishing for nearly 25 years. After college, he worked as journalist, and later as a publisher. Print Media's business centres on print for the comic industry.

Complementing the re-launched magazine will be more UK comics albums, adding to its current titles - Iron Moon, Frontier and Mirabilis. Plans include collections of some of the strips published in the first limited edition run, including Black Ops Extreme, drawn by PJ Holden.