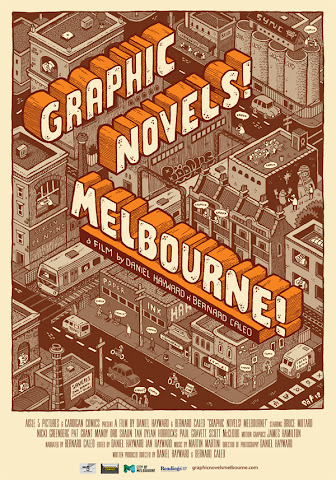 Co-directors David Hayward and Bernard Caleo will be in London to introduce their film.

Over the past five years, graphic novel publishing has arrived in Australia, and it is overwhelmingly based in Melbourne. In Graphic Novels! Melbourne! we meet theartists and the publishers of this new phenomenon in Australian book publishing.The film investigates the comic book community of Melbourne, out of which thegraphic novel artists have grown.

The city and suburbs of Melbourne feature asbackdrops against which the film, the artists and the graphic novels are set. As partof this documentary, we witness comic books in Melbourne entering universitystudies, literature festivals, and art galleries.

Graphic Novels! Melbourne! uncovers an energetic, diverse and productive comicsculture on the streets of Melbourne. It investigates the life and work of four local graphic novelists in particular: Pat Grant, Nicki Greenberg, Mandy Ord and BruceMutard.

There are also interviews with four international comic book luminaries:Scott McCloud, Shaun Tan, Dylan Horrocks and Paul Gravett, all of whom lend theirperspective to the development of comics culture in Melbourne.

• Graphic Novels! Melbourne - Wednesday 13th February, The Anatomy Theatre at School of Arts & Humanities at King’s College, The Strand, London WC2R 2LS. Doors open 7pm for a 7.20pm start. To book your tickets at £5 each, please send an email to give your name and how many tickets you would like, and we’ll confirm by return. Some tickets will also be available on the night, on the door.