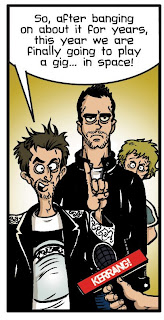 On sale today, Steve is drawing Muse, who become the victim of their own stupidity.

The massive comic section includes all many music stars as you've never seen them before, including Bring Me The Horizon, Blink-182, My Chemical Romance, Slash and Biffy Clyro.


Steve Beckett is also keeping busy with a number of commisisons, finishing off the final of three new Brassneck comics for the 2014 Dandy Annual, ("I'm hoping this won’t be my last opportunity to write and draw the metal maniac since his recent reboot over at the brand new digital Dandy,"he says); and working on
new Oscar’s Orc Army for TOXIC magazine. 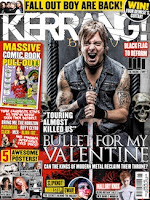