With the move by DC Thomson to online publishing of The Dandy still an item of debate by British comic fans, and with creators such as Jamie Smart suggesting the launch of an all-new creator-driven humour title, Dandy artist Steve Beckett hasn't been letting the grass go - he's only gone and started one.

Steve describes CRUMBS! – The Online Story Paper as "the place to be for brand new daft comics... presented in a fun vintage British comics style, developing and growing over time and will showcase a whole host of new characters.

"The plan is to give Crumbs! comic its own dedicated web site," he says, "once a substantial body of work has been produced."

Right now it's a comic featuring just one artist - Steve - and it's only just begun, but perhaps other creators should drop him a line and suggest combining forces?

Steve Beckett is a Grimsby based graphic designer and Illustrator with several years experience of working in a range of print and digital media. He produces vibrant and exciting design and illustration work for a variety of clients, including corporate, small business, business, publishing and charitable organisations. Current and previous clients include record labels, broadcasters, clothing manufacturers, NGO’s, shops, and both the Beano and Dandy comics.

Steve say readers comments and feedback are welcome, so why not pop over to his site and take a look at his work so far. Here's 'Mai Bad' - "The little kid who makes BIG Mistakes!" - a gloriously silly example of his superb work... 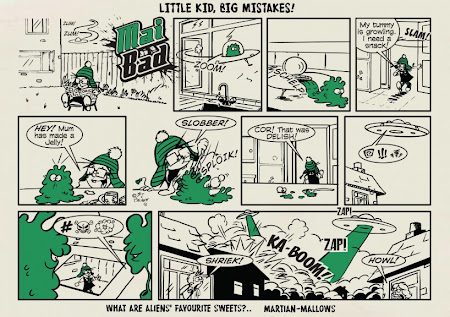 Hah, that looks great. Good luck to him, I hope it takes off. One thing....isn't that character called Mai Bad? As in MY bad? :)

Great idea and great title. Hope it takes off.