Airfix Are Looking For Their Original Box Art

The British plastic kit manufacturer Airfix are looking for the loan of original artwork that was used for their box lids during the 1960s and 1970s for an exhibition due to take place at the RAF Museum at Hendon, London beginning in Summer 2013.

Airfix is the oldest UK manufacturer of scale plastic model kits and has been producing kits since 1952. The boom in plastic modelling in the 1960s and 1970 made the company a UK household name but in the 1980s, like comics, plastic modelling went into decline as new technologies expanded children's interests. The company passed through various owners but today it is owned by Hornby Hobbies Ltd who also own the well-known brands of Scalextric and Corgi as well as Hornby and Airfix. 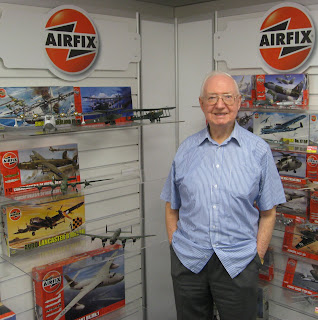 A big part of Airfix's success back in the 1960s and 1970s can be put down to the superb paintings that adorned their kit boxes which sparked the imaginations of their young purchasers. Ron Jobson, who is best known in comics terms as the artist of the superb Space Kingley annuals of the 1950s, painted box illustrations for Airfix while the most prolific artist working for them at the time was Roy Cross (right).

Cross had previously worked on original Eagle, painting centre spread cutaways, and on Eagle's sibling Swift, painting full page front covers. A lot of his Airfix artwork is reproduced in his book The Vintage Years Of Airfix Box Art while Airfix themselves sell coasters of some of his most well-known box paintings.

Like the original comics artwork of the era, much of the Airfix artwork ended up scattered and lost and while the company have access to some of it they are looking to borrow any that might be in the hands of private collectors for the RAF Museum exhibition.

If anyone has any, or knows of someone who has any, and would be willing to lend the RAF Museum an original painting then they can get in touch with Airfix by e-mail at webteam@hornby.com or by calling 01843 233 500.

The Airfix website is here and has more details of their search for artwork here.

The list of coasters of Airfix box art available to purchase is here.

There are more example of Roy Cross' artwork at the Collecting Airfix Kits website which includes the original cover artwork for Swift Volume 9 Number 28 of a Supermarine Scimitar jet fighter.