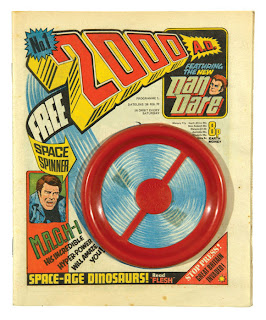 2000AD celebrates its 35th birthday this month its official birthday is 26th February, with Judge Dredd following one week later. Here at downthetubes we would like to wish the title - and everyone who has worked on it down the years - a very happy anniversary!

There will be plenty of celebrations to mark this thrill-powered occasion, with the 2000AD team lining up many convention appearances and anniversary book releases through 2012.

Throughout this month, we'll be posting some birthday wishes from many British comic creators recalling their first memory of 2000AD and their favourite characters. Contributors include writer Alan Grant, former 2000AD editor Andy Diggle, writer Garth Ennis, artists Arthur Ranson and Rufus Dayglo, Steve Yeowell and many others. Our thanks to everyone who has joined in with this celebration.

Other fans of the comic have also posted their messages here on the DTT Forum.

Launched in February 1977, 2000AD's blend of science fiction adventure stories, often barbed allegories about our own society (particularly within the pages of Judge Dredd) has been delighting comic fans for a long time.

However, the first issue was a different beast to the more 'adult' title of today - and Dredd wasn't even in the first 8p issue, which came with a free Space Spinner mini-frisbee. Instead, readers were treated to Invasion! - set in 1999, which saw Britain under the heel of the menacing Volgans, thinly-disguised Russians, and rebel Bill Savage leading the fight against them, out for revenge for the death of his family. Flesh pitted time-travelling humans against dinosaurs, with the reptiles often getting the upper hand; M.A.C.H. 1, a brutal homage to television's Six Million Dollar Man; and Harlem Heroes, a future sports strip drawn by Dave Gibbons.

Leading the title, though, was a revamped Dan Dare, written by Pat Mills, drawn by Massimo Belardinelli and featuring some amazing aliens, which IPC clearly felt was the comic's 'hook' to generate parental buys, although they would soon discover that this Dan was very unlike the square-jawed original from the 1950’s Eagle comic.

Back in 1977, there was nothing else like 2000AD on the shelves. Its combination of action adventure SF gripped thousands from the start, flouting traditional wisdom at publishers IPC that held that SF comics were poor sellers. Its roll call of characters down the years - Judge Dredd, Halo Jones, Robo-Hunter, Nemesis the Warlock, Sinister Dexter and many others - as well as its creators, is without equal.

2000AD rode high on the success of Star Wars when the first film was released later in the same year. 'SciFi' was hot and it helped the comic build a loyal audience, many of whom still reading it to this day. As a SF comic, it is now unique on the British news stand: a companion title, Starlord, proved short-lived and DC Thomson's long-running picture library title, Starblazer, was cancelled in 1991. Marvel UK's Star Wars Weekly title is now a distant memory and Doctor Who Weekly soon reduced its strip content after its launch in 1979 and went monthly, cutting back its fiction content still further.

2000AD deserves praise, not just for its sheer longevity and memorable characters, but for the huge number of comic creators it has given work to - many of them who then went on to create material for the US market.

A copy of the first issue of 2000AD might cost you over £100 to buy today if you find one with its space spinner intact. But the title's legacy is far more valuable to British comic fans.

Long may the thrill power continue!