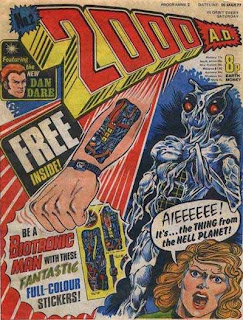 My very first memory of 2000AD was from before I even started reading it. A friend gave me the bionic stickers that were given away with Prog 2, and I remember my schoolteacher telling me to take them off my arms and legs (I was still in shorts!). I must have been 6 years old at the time. 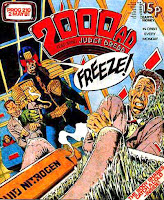 But I didn't start actually reading 2000AD until a few years later, fool that I was.The first issue I ever read was Prog 210 in 1981, when I was 10 years old. My brother John had talked our parents into getting it, bless him. I remember being wowed by the Brian Bolland cover: Dredd snarling "Freeze!" to a perp half-frozen in liquid nitrogen. And the back cover was a Mean Arena pin-up by Steve Dillon. I loved it so much I cut it off and stuck it on my bedroom wall... 'til my big brother made me sellotape it back onto the prog! We should have bought two copies...

Obviously Judge Dredd is the man, especially in the hands of John Wagner. But character-wise, personally I always preferred Johnny Alpha. I loved his quiet stoicism. He just deals with it, lets his actions speak for him. Still waters. An amazing reversal and cliffhanger could be as simple as him delivering the line: "You get the girl. I'm going to stop the execution." And you just know it's all going to kick off next prog! 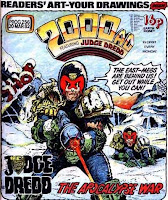 As for a favourite 2000AD story, it's impossible to choose just one. There are so many. That comic quite literally changed the course of my life. But as an object lesson in the craft of story structure, The Apocalypse War takes a lot of beating.

That story starts with global nuclear apocalypse and contracts from there, distilling and focusing the drama into an ever tighter and tighter space, until it's like an inverted pyramid with the entire weight of the world resting on Dredd's finger on the nuclear button. Amazing.

As a former Tharg, sadly my anecdotes aren't for public consumption! But I made a lot of good friends there. What a great bunch of people.