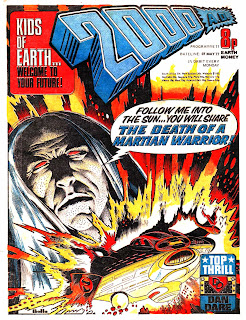 Working on The Boys, Battlefields (and other war stories), Nick Fury, Dicks III, Crossed, some more stuff still on the secret list.

It would probably be seeing the cover of Prog 11 in my local newsagent and being instantly mesmerised. It had Mister Monday, the bloke from Dan Dare, telling us to follow him into the sun and share the death of a Martian warrior. I'd never, ever seen anything like it; I probably went for it like Stimpy for the wonderful, candy-like, shiny red button.

Inside you had M.A.C.H. 1 driving a souped-up Lagonda with a terrified boffin in the back through most of the Soviet bloc, and over several people while he was at it. You had Dredd - who looked amazing enough on his own - fighting the robot wars. You had Bill Savage being an angry mad bastard, ten times more mental than the slavering, rabid guard dogs that chewed their way through that episode. You had the Harlem Heroes up against Artie Gruber, and what in the name of God had happened to the guy to make him look like that? You had Dan Dare versus the Biogs and the spectacular death of the aforementioned Monday, drawn by Bellardinelli - that was eyes out on stalks time, as I recall.

But best of all, holiest of holies, you had dinosaurs in Flesh. Dinosaurs. And - all praise to the God of seven year-old psychopaths - they were... eating people...

Favourites are hard. Probably Dredd overall, just because of the plethora of incredible stories, characters and moments we've had over the years. Stront, Slaine, Nemesis, ABCs/RoBusters and Rogue have all yielded up their share of delights.

I recall being a big fan of Sam Slade's peculiar brand of long-suffering accidental heroism for a long time; the very last page of the first Robo Hunter storyline is still a sight to behold. Back at the beginning, Bill Savage as an out-and-out maniac and Dan Dare when Dave Gibbons really got going on the Space Fort stuff.

But if I was thinking in terms of what first attracted me to the comic, what made me think, no, there is absolutely nothing else like this anywhere in the universe, then I think it would indeed have to be Flesh. You could feel the ground shake as Old One Eye charged her prey, hear the victims' screams as her huge teeth punched through their bodies and they were squeezed down into her black gullet, smell the hot blood as it poured off the page into your lap.

There's a Ramon Sola shot of the Tyrannosaur clans gathering (in the aforementioned prog 11) that I know I'm going to take to my grave.

That's another hard one. If I had to boil it down, probably the memory of reading it weekly as a kid and somehow always feeling just a little bit happier afterwards. It really sparked you up, if only briefly- it made bad days good and good days better.

Just keep hold of John Wagner. Keep him on Dredd, keep him on Stront. Do whatever it takes.

Not so much an anecdote, more an observation: I do think it would be nice if Steve MacManus got a bit more recognition. He seems to have been edited out of the photograph to a certain extent, and yet he was editor for 400 progs during the comic's heyday.

Sure, it's hard to go wrong with the level and variety of talent he had at his disposal, but I think Steve provided more than just a steady hand on the tiller.

• This post is part of a series of birthday tributes from a wide range of comic creators celebrating 2000AD's birthday on 26th February 2012. For more about 2000AD, visit www.2000adonline.com