Scramble for the new Commandos! 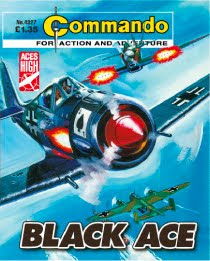 The first three Commando books now on sale in all good newsagents complete DC Thomson's series of six books saluting the heroes of the Battle Of Britain, called "Aces High".

"We’ve dug back into the archives to give some of the older books an airing," says editor Calum Laird. "Very few Commando readers will have seen these, I hope, and will appreciate them."

Inside the front covers of them all are individual aircraft illustrations by Ian Kennedy.

If you like these stories, Carlton’s jumbo Commando collection of 10 stories from the Battle Of Britain – appropriately called Scramble! – is available from all good bookshops (ISBN 978-1-84732-421-4).  It includes stories like "Ace Without Honour", "Island of Heroes" and "Brigand Squadron" as well as "Blind Courage", "Fly Fast-Shoot Fast" or "Spitfire Spirit" and there's one of our usual amazon links at the end of this news item

A survivor… alone on a cold, dark sea…this was the best that any RAF pilot could hope for if he ran up against Von Stein of the Luftwaffe. The German flew a jet-black Focke-Wulf 190, and his emblem was the ace of spades, the card of death.They called young Jack Collins a coward until the day he and his Hurricane took off to meet the Black Ace in mortal combat… 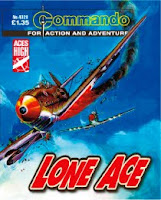 “Stand by for a crash — young Danny Price has just taken off!” What a reputation for a young pilot to get. Too bad that every word of it was true.
From recklessness and bad judgement, or maybe just through bad luck, Dan finished up pranging every aircraft he ever flew. Spitfires, Hurricanes, Grumman Wildcats – they were all the same to Dan. In the sea, in the fields, on the decks of carriers he dumped them with amazing regularity, totally beyond repair.
Not until he crashed one with cold courage right on to an attacking U-Boat did anyone start believing in Dan — even Dan himself! 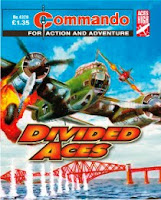 Squadron Leader Jack Pearson was beginning to wonder if his first command might be his last. English-born Jack was determined to make the most of his posting to a base outside Edinburgh — even if the locals were less than friendly about his, and his fellow countrymen’s, presence.
As if that wasn’t enough, added to the mix were some veteran Polish fliers who didn’t like the way their new skipper was running things… Jack would have his work cut out for him if he was going to unite these divided aces? 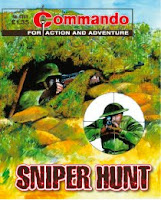 Lance-Corporal Matt Horne always wanted to be a sniper. So when the chance came to join an established sniper team as a flanker — to watch the backs of the sniper and his spotter — Matt grabbed it.
However, with a mysterious rival marksman causing carefully-calculated mayhem, Matt soon found out that sniping was a bitter, deadly game — one where there were no rules and the hunter very easily became the hunted…