In Review: Classics from the Comics 174 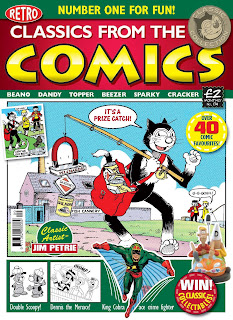 The latest issue of Classics from the Comics offers the usual fine selection of both humour and adventure comics from the DC Thomson archive, this month spotlighting longtime Minnie the Minx artist Jim Petrie and bringing fans an episode of King Cobra, a superhero drawn by Ron Smith.

Alongside the mix of strips from The Beano, Dandy, Topper and Sparky - to name but a few - there's also the chance to win a Gnasher picture box and a Bash Street Kids-inspired Plug and Sally fugurine.

There's plenty to enjoy this issue - so it's very sad to learn that the title, in its fourteenth year of publication, is destined for cancellation due to low sales, especially after all hard work editor Garry Fraser has been putting into recent issues (the last issue will be Number 175, on sale on 13th October). Sadly, Classics from the Comics has been poorly distributed and behind-the-scenes production changes at DC Thomson mean it's no longer viable for them to publish this wonderful assemblage of comics from yesteryear.

It's a darn shame, too, because I'm sure there is a market for this kind of title, albeit one that's fairly 'niche'.

Favourite strips this issue for me are Beryl the Peril (whose magic tricks land her in hot water); a superhero skit from Sparky's Puss an' Boots; a bizarre strip from Nutty titled Dick Turban, pitting a desert thief against the Foreign Legion; a fab Mickey the Monkey from Topper; and the ever-brilliant Spoofer McGraw from Sparky, this issue explaining that Moby Dick, the great white whale, was actually a great white polar bear that ate too much honey. Priceless!

The continuing adventures of The Space Kids, and appearance of King Cobra, who featured in The Hotspur, and a text adventure, Dixon Hawke, from 1938 (presumably from an early Beano) make up the adventure content of the issue. Cobra is a bizarre British superhero with little originality - a reporter by day, crime fighter by night - but Ron Smith's art is great, and this snake-inspired adventurer is far less violent than Indian publisher Raj Comics Nagraj, who is the only reptilian-powered hero I can think of at this time of the morning.

Classics from the Comics has much to recommend it for any fan of British comics of yesteryear; it's just a shame its distribution is so patchy (which must surely be another reason for its demise). If you can find a copy in your local newsagents, check it out, and revel in a bit of welcome nostalgia...

• Classics from the Comics, published by DC Thomson, is on sale now in all good UK newsagents, price £2 (a bargain!)

• More about King Cobra on the International Hero web site