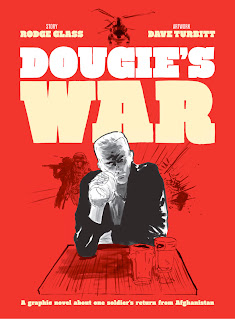 The book gets its launch tomorrow (Thursday 16th September 2010) with a signing by author Rodge Glass and artist Dave Turbitt at Waterstones in Sauchiehall Street, Glasgow.

It's Dave’s first graphic novel. Trained in graphic design he's employed by the BBC, where he works on Doctor Who.

The book is being published by Glasgow-based Freight, who also publish the award-winning literary magazine, Gutter.

Dougie Campbell is a Scottish soldier, a veteran of Afghanistan, who comes home to the south side of Glasgow. He's just left the British Army but cannot forget his experiences of combat. A battle rages inside as he struggles to adjust to civilian life, trying to live with his memories and understand his burning need for recognition. 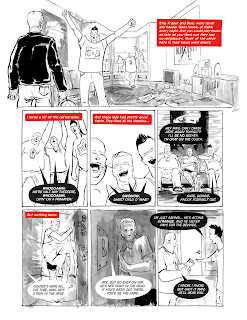 The story is a fictionalised account of real veterans’ experiences based on meticulous research and interviews with soldiers conducted by the author.

“We ask our service men and women to do things and witness things the rest of us cannot imagine," explains Rodge Glass, who is author of two novels, No Fireworks, Hope for Newborns and Alasdair Gray: A Secretary’s Biography. "They're trained to operate in the harshest and most stressful environments. But medical research shows that the effects of those experiences can be deeply damaging, sometimes after a single traumatic event, sometimes many years later, the cumulative effect of pushing oneself to the limit over long periods.

“Dougie’s War aims to do for the war in Afghanistan what Waltz with Bashir did for the Arab-Israeli conflict," he adds. "Graphic novels have an advantage over other art forms in allowing the reader to experience something of the horror chronic PTSD can induce. Treatment of PTSD is improving all the time, whether via the NHS or veterans’ charities, but it is vital that soldiers and those closest to them recognise the symptoms and seek help.

“We hope that Dougie’s War increases understanding of what some veterans suffer, particularly to a younger generation, and illustrates the dangers of leaving PTSD untreated. In years to come thousands of ex-soldiers and other service personnel will be living day to day with the legacy of Iraq and Afghanistan. It is vital that society addresses this, making it as easy as possible for veterans to seek help.” 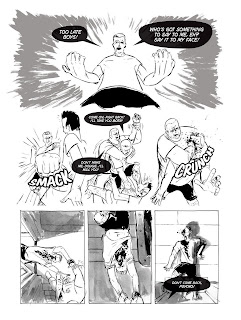 Part funded by the Scottish Veterans Fund and Creative Scotland, along with photography taken in combat in Afghanistan, the book includes moving interviews with a number of army officers and others who have experienced combat first hand in a range of conflicts from the Falklands to Iraq and Afghanistan and have suffered the symptoms of Post-traumatic Stress Disorder. They expose a culture in which appearances are everything and asking for help risks a dangerous loss of authority.

Tam, a veteran of Northern Ireland and the Falklands, who suffered chronic PTSD and is interviewed in Dougie’s War said, "You look out for others and you can’t display weakness, it’s about the role you’re in, you’ve to project an image for people to trust you. I think servicemen are some of the greatest actors in the world. You play this part.

"I didn’t talk to my wife about it, she had years of it," he continues. ‘The neighbours used to think the house was haunted, the screaming…

"The worst was I had my wife by the nightdress and I was physically dragging her off the bed during the night, saying 'get into this trench, get into the trench'." 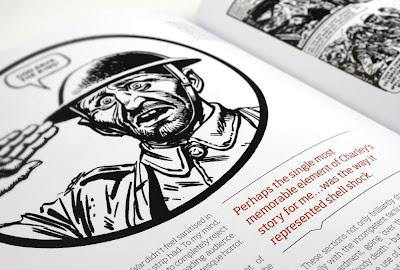 Dougie’s War also contains extracts from Pat Mills’ highly influential early 1980s comic strip Charley’s War, the precursor of many contemporary British graphic novels, which is currently being published in full by Titan Books. Set in the First World War, it was the first war comic to highlight the psychological effects of combat and what was then called shell shock.

“The only graphic novel I’m aware of on the war in Afghanistan, Dougie’s War reveals the hidden cost of all wars," notes Charley's War writer Pat Mills. "It's very memorable and powerful, the art is stylish, moody and cinematic.”

“Rodge was a natural choice to write this graphic novel," feels Adrian Searle, Publisher at Freight and co-editor of Gutter magazine. "His fiction has a forensic interest in families and the stresses contemporary life places on them.

"Our troops in Afghanistan have seen some of the fiercest fighting since the Second World War and, in addition to the tragic loss of life, there will be a resulting long-term legacy for many of those who have served there.

“This an important and timely book and is already generating wide interest, not just in the UK. We’ve had enquiries from publishers and retailers in the US and Germany and will be talking to potential partners in countries involved in the coalition across the world in the months to come.”