In Review: XIII - The Day Of The Black Sun 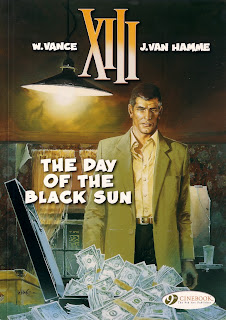 Who is XIII? Cop, gangster, secret agent or mercenary? The stories concerning the amnesiac man with "XIII" tattooed on his shoulder written by Jean Van Hamme and illustrated by William Vance ran to a total of 19 French albums with the first story The Day Of The Black Sun beginning in Spirou issue 2408 in 1984 as Le Jour Du Soleil Noir and the final album, Le Dernier Round, being published in 2007. With the series complete in the French speaking world and never having been translated into English beyond the third album, Cinebook are now releasing the complete series of books at a rate of one every two months which means that they will reach the first of the books that hasn't appeared in English before towards the end of 2010 and they therefore aim to complete the set by 2013.

A badly injured man is washed up on a remote American beach and is taken in by an elderly couple who, with the help of a washed out doctor, nurse him back to life over the course of two months. The bullet wound to his head, as well as leaving him with a patch of white hair where it hit, has left him without any memory whatsoever of his previous life. The only clues are a tatoo of XIII on his shoulder, a safe deposit box key and his ability to defend those around him with whatever weapon comes to hand. 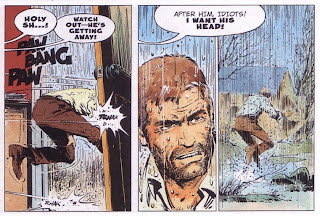 When assassins kill the elderly couple and almost kill him, he leaves for the port of Eastown where the safe deposit bank is located. There he has a run in with a police lieutenant, who seems to know who he is, as well as apparent mobsters and a secretive government agency. Colonel Amos of this agency tells him of the assassination of the US President some two months beforehand, an event referred to in the papers as the Day of the Black Sun, and shows him a picture of the alleged assassin who appears to be XIII himself.

The Day Of The Black Sun is a contemporary thriller that was originally published in 1984 and it shows in the art with vehicles and clothing styles typical of the time period. But this is no criticism of Vance's art which stands up well to the intervening years and portrays the numerous characters and locations well. Published only three years after the attempted assassination of President Ronald Reagan, Van Hamme's plot would have been as contemporary as Vance's art and lays down the beginning of multiple story strands that will no doubt play out over the next four books that take in the first major story arc of the ongoing series. 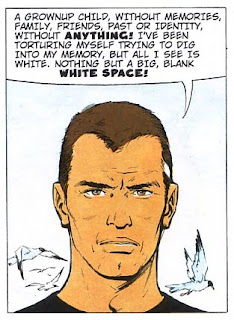 XIII has proved to be very popular in the French speaking world with 19 different albums as well as having been turned into both a computer game and a TV mini-series as well as a spin-off bande dessinee series XIII Mystery, the third title of which will be published in French in October 2010.

XIII - The Day Of The Black Sun is the beginning of a saga that will take Cinebook over two years to complete. It is a book that tantalises for what is to come, leaving the reader with the beginnings of what could well be multiple storylines. With Jean Van Hamme's record on other contemporary thrillers such as Lady S and Largo Winch, this looks like it will be a journey well worth taking.

There are more details of the English language XIII books on the Cinebook website.

There are more details of the original French XIII albums on the Dargaud website.
Posted by Jeremy Briggs at 7:00 am