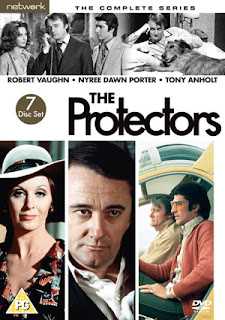 It's not Gerry Anderson's best-loved series - even though it was his most expensive to date - and it certainly isn't the kind of science fiction that made his name, such as Thunderbirds and UFO. But The Protectors - out on DVD next week in the UK - does feature a top-notch cast that includes Robert Vaughn and Nyree Dawn Porter.

Robert Vaughn stars as Harry Rule, the suave American who leads the operations of three private sleuths whose job is to protect the innocent; Nyree Dawn Porter plays the elegant, Rome-based Contessa di Contini, while Space:1999 star Tony Anholt is Paul Buchet, a French agent operating out of a Paris apartment.

Despite its lack of science fiction content The Protectors, commissioned by Lew Grade that first aired in the early 1970s, proved a popular show that ran for two seasons and a third was in production before it was cancelled after sponsor Faberge withdrew financial support.

Produced by Gerry Anderson and Reg Hill (Thunderbirds), this glossy, stylish series was one of ITC’s most lavish and ambitious projects, boasting intriguing, action-packed storylines (which, reportedly, Robert Vaughn once claimed he could never understand) and extensive location filming in London, Malta - which served as a variety of Mediterranean locations - Venice and rural Hertfordshire.

The theme song, 'Avenues and Alleyways

' by Mitch Murray and Peter Callender was a chart success for singer Tony Christie, reaching Number 37 on its original release and Number 26 in the UK singles chart on its re-release in 2005, hot on the heels of 'Is this the Way to Amarillo'.


This new 7-DVD set from Network DVD comprises all 52 half-hour episodes, originally broadcast on ITV between 1972 and 1974.

• Despite its cult status, The Protectors doesn't appear to have much of a web presence, although The Protectors Online offers a bit more information on the show and there is an excellent series guide on the Star Trader web site. Fanderson has a location guide to its UK filming sites, and this Wikipedia entry.
Posted by John Freeman at 10:04 am