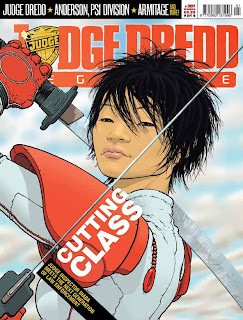 The latest issue of the Judge Dredd Megazine, Meg 301, has a distinctly Scottish flavour to its art and script droids.

Behind a lovely Judge Inspector Inaba cover by Frank Quitely, from Cal-Hab's west coast, comes the Dredd story The Natural (shown below) about a Mega City One athlete who, controversially, refuses cybernetic assistance for his races. Written by Gordon Rennie, pencilled by Graeme Neil Reid, both from the east coast and inked by west coast Gary Erskine, the strip is the debut for Graeme in a 2000AD title. Graeme has been talking about his route to drawing Dredd professionally on his blog where he bravely shows off some of his earliest Dredd artwork from 20 years ago, as well as the spec scripts and responses he received from the Nerve Centre at the time. 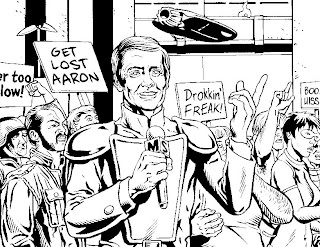 The Judge Inspector Inaba story Hondo-City Justice, with art by Neil Googe, is written by Cal-Hab-er Robbie Morrison while Robbie's Nikolai Dante co-creator Simon Fraser, another Cal-Hab-er, writes and draws Lilly MacKenzie And The Mines Of Charybdis now on its fourth episode in which Lilly and Cosmo finally make it onto the surface of the planet.

Both stories are coloured by Gary Caldwell, yet another Cal-Hab-er.

Last but certainly not least of the Cal-Hab droids in Meg 301 is Alan Grant who is writing the Anderson Psi-Division story The House Of Vyle, drawn by Boo Cook, in which Cassandra is called to the hamlet of Salem just outside the Mega-City's walls where strange things are afoot.

Megazine 301 also includes Armitage by Dave Stone and John Cooper while the reprint is a selection of Mick McMahon's Judge Dredd stories.

• Judge Dredd Megazine 301 is available from newsagents and has a cover price of £5.99.

• Graeme Neil Reid, Gary Erskine and Simon Fraser are all members of the daily artblog Scotch Corner.
Posted by Jeremy Briggs at 7:00 am