In Review: Yoko Tsuno - The Dragon Of Hong Kong 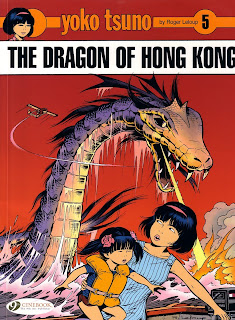 Roger Leloup's tales of the adventures of Yoko Tsuno, a female Japanese electronics engineer, began in Spirou magazine in 1970 and while set in the modern day they can veer between full on science-fiction and more realistic straight adventure. The Dragon Of Hong Kong, despite its title and cover, is one of the straight adventure stories. The 16th of the 24 Franco-Belgian Yoko Tsuno albums, this is the Cinebook's 5th Yoko Tsuno book and the first time that the story has been published in English.

Yoko has travelled to Hong Kong to visit with Chinese relatives and while sailing in Victoria Harbour her junk is attacked by a lizard-like sea monster. Surviving the attack, Yoko sets about locating the huge lizard and discovers that an orphaned child, Morning Dew, has befriended it. Morning Dew lives with her frail grandfather who gives his permission for the child to go with Yoko to search for the lizard.

During this search their boat is attacked by a different monster that breathes fire and nearly kills them. Morning Dew's grandfather tells Yoko that the two monsters were created to star in a film The Dragon Of Hong Kong which leads Yoko to a businessman with a surprising secret. 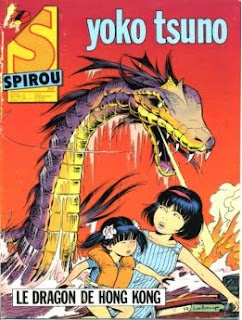 Yoko Tsuno is very much a adventure series for children with Yoko something of a Nancy Drew like character. For this particular story, which ran in in Spirou between issues 2527 and 2536 in 1986, there is no great need for Yoko to have an electronics background. What she does have is a logical mind and a need to understand the unnatural beasts she comes across coupled with the desire to set things to rights. That also includes protecting Morning Dew from the deaths of those she loves which includes legally adopting the girl. Roger Leloup's story is decidedly upbeat with Yoko being a positive role model throughout whilst his artwork is effective on his monsters and accurate on his ships and planes. 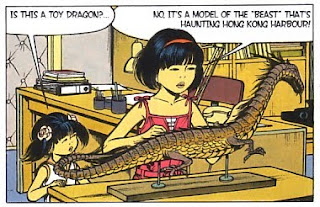 With the story nearly a quarter of a century old it takes place in British Hong Kong rather than Chinese Hong Kong but that is irrelevant to the plot and the only thing that noticeably dates it is when Yoko is taken to the computer room of a bank, with its tractor-feed printers, when she is trying to find the businessman. The reasons behind the creation of the two sea monsters are childishly effective, if somewhat far fetched for an adult, but I do like Leloup's concept of an oriental monster movie being shot on location with full size creatures rather than men in monster suits like the Toho Gojira/Godzilla movies, as impractical as it would be in reality.

Yoko Tsuno - The Dragon Of Kong Kong is a well executed adventure story for children, perhaps of more interest to girls with the two female lead characters, but the two monsters should be more than enough the keep boys interested as well. This would certainly make a change from buying daughters and nieces manga books as birthday or Christmas presents.

• There are more details of the English language Yoko Tsuno books on the Cinebook website.

• There are more details of the French language Yoko Tsuno albums on the official Yoko Tsuno website (in French).
Posted by Jeremy Briggs at 2:26 pm

Thanks for a good comparison account of Yoko Tsuno's new English adventure, with it's original release. Enjoyed reading it.