In Review: Valerian and Laureline - The City of Shifting Waters 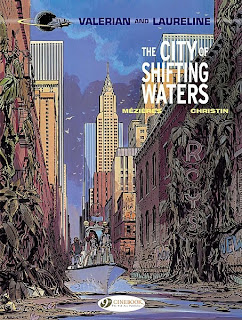 The biggest science fiction comic strip in the French language world is not, as you might think, Barbarella but rather a series called Valerian and Laureline. Running for over 40 years it has reached a total of more than 20 albums, all written by Pierre Christin with art by Jean-Claude Mezieres. The books tell the stories of two time/space agents, the 28th century born Valerian and his female companion Laureline who comes from the Middle Ages, and with both spacecraft and time machines available to them, the series has the same potential as Doctor Who for a vast range of settings. The City Of Shifting Waters is the first book in the French series.

Valerian and Laureline are spatio-temporal agents of Galaxity, the Earth of the 28th century, who are dispatched back to 1986 to recapture Galaxity’s only political prisoner, Xombul, who has escaped and travelled back to just after a devastating nuclear accident changed the planet into a flooded world. Valerian goes undercover in a flooded New York with hippy thieves who take what they can get from the upper, dry, stories of the skyscrapers as well as using scuba gear to target bank vaults. With them he discovers robots taking scientific secrets and traces them back to Xombul who effectively kidnaps Valerian and Laureline to his lair in the Rocky Mountains from which he plans to take over the world. 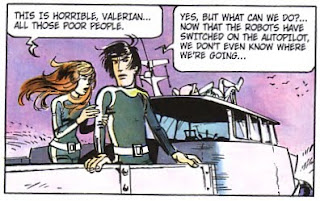 The Valerian and Laureline books have had sporadic English language releases before with the only UK publications being four books published by Hodder-Dargaud in the mid-1980s. While this story originally began in Pilote magazine in July 1968, this is the first time that this particular album has been published in English. The original story was split over two runs in Pilote, the first from July to October 1968 while the second ran from April to July 1969, and it does show in the book with the first half set in the partially submerged New York before our heroes literally sail off into the sunset and the second half of the story which is set in the Rocky Mountains. 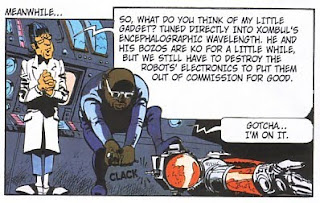 If anything Christin's plot point of a flooded Earth is more relevant now than it was in 1968, albeit rather more familiar now to us through CGI effects in disaster films than it would have been to cinema audiences 40 years ago. Yet the story does reveal its age with the main protagonists in the city being hippies rather than the Mad Max-esque characters that they might be portrayed as today, while Laureline's frequent outbursts on women's liberation feel equally dated. Despite the time travel element, this is a simple story with few characters that moves along to its expected conclusion.

Yet the biggest problem for me is Mezieres artwork. In itself it is good with the partially submerged cityscapes in the first half and a decent representation of a heli-plane based on the Canadair CL-84 amongst other things in the second, but his style doesn't seem to fit with the story as this is an adventure story with humour artwork. Valerian and Laureline themselves are bland, with out of proportion heads, making them look rather like Terrahawks puppets, while the rest of the characters wouldn't look out of place in the pages of Mad magazine, with Xombul's mad scientist, Mr Schroeder, apparently based on Jerry Lewis’ The Nutty Professor. For a tongue-in-cheek series like Clifton this would work but, for me, it looks out of place in what is basically a straight good versus evil adventure story. Which is a pity since, with the conclusion of The Chimpanzee Complex and the Aldebaran/Betelgeuse cycle, Cinebook is in need of a new mature science fiction series to add to their schedule and unfortunately Valerian and Laureline is not it – not yet, anyway.

Valerian and Laureline - The City of Shifting Waters will be of interest to younger readers but adults will probably not find it satisfying enough either story-wise or art-wise. Since the series has lasted for so long in France, I can only assume that it gets better than this.

• There are more details of The City of Shifting Waters on the Cinebook website.

• There are more details of the Valerian and Laureline books on by Jean-Claude Mezieres’ website (in French).
Posted by Jeremy Briggs at 7:00 am

Mezieres artwork improves considerably with each album. Some albums are masterpieces in art, and very influential. The stories are always good though.