In Review: The Scorpion - The Holy Valley 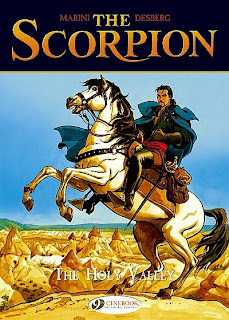 Adventurer, womaniser, swordsman, thief, swindler, arrogantly self assured of his own survival, with blood ties to one of the most important people on the planet, and a woman whom he both hates and desires, and who appears to reciprocate those same feelings back at him - The Scorpion could quite easily be 2000AD's Nikolai Dante. Yet there is one big difference - instead of being set in the 27th century, The Scorpion is set in the 18th century.

In the Vatican the old Pope has been murdered and Cardinal Trebaldi, the Prefect for the Propagation of the Faith, which he propagates with warrior monks, has been elected in his place after showing the other Cardinals in the Conclave what he claims to be the true Cross of Saint Peter, the first Pope. Yet there is more to the deceit since the new Pope does not believe in God and is considerably more Roman than Catholic. The Scorpion is on a quest to find the true Cross of St Peter, a quest that takes him, his sidekick, a former Hussar, and the beautifully dangerous Egyptian woman, Mejai, to Cappadocia pursued by the leader of Tebaldi's warrior monks Rochnan and the new Pope's own treasure hunter, Ansea Latal. 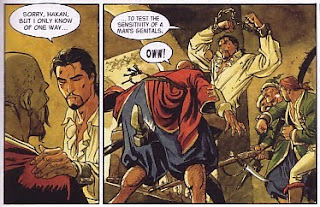 The Holy Valley is reminiscent of Indiana Jones And The Last Crusade with the Scorpion treasure hunting up an enclosed valley for a religious artifact hotly pursued by those who want the treasure for more nefarious means, yet to suggest the connection almost does the book an injustice. Written by Stephen Desberg, The Scorpion is a major departure from his other Cinebook series, IR$, which is built around international banking intrigue. The Scorpion is an historical swash buckling adventure with a dizzying array of double and triple crosses as the story progresses. Indeed the only person that the Scorpion seems to be able to trust thus far is Hussar. 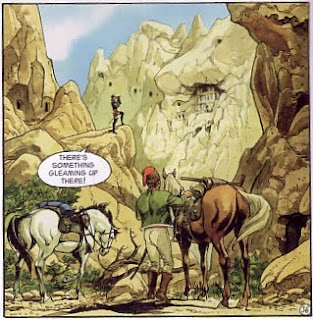 The artist for the series is Enrico Marini who doesn't feature in any other Cinebook series which is a pity because of all the adventure artists that Cinebook publish Marini is my favourite. From his well defined and charismatic characters to his scene setting panels with their unusual angles, from the dynamism of his fight scenes to his use of colour, The Scorpion books look sumptuous whether the action is set inside the opulence of the Vatican or in an arid sun baked valley. I would certainly like to see Cinebook publish other series with Marini's art.

So is there a drawback? Sort of because The Scorpion isn't a series, it is a serial. The Holy Valley is the third English language Scorpion book which translates La Vallee Sacree, the fifth French language album originally published in 2004. Now since the previous two Cinebook titles, The Devil's Mark and The Devil In The Vatican, were both double length books no albums have been missed but you shouldn't really miss out on them either otherwise you will have missed a big chunk of the story, despite the short textual update at the start of each book.

The Scorpion is great fun, a well written and beautifully illustrated series that deserves to be read from the beginning and you will appreciate The Holy Valley much more for doing so. If you like Nikolai Dante, you should try it.

There are more details of The Scorpion books on the Cinebook website.

There are more details of the French Scorpion books on the Le Scorpion website (in French).

The next Scorpion book, The Treasure Of The Templars, is due to be published by Cinebook in August 2010.
Posted by Jeremy Briggs at 7:00 am

There are some instances of nudity in the original. Have Cinebook censored it, as they use to do?

The Holy Valley does not have the "certain illustrations have been modified" comment at the beginning although the other two Scorpion books do.