The Best Of The Victor Due For Release 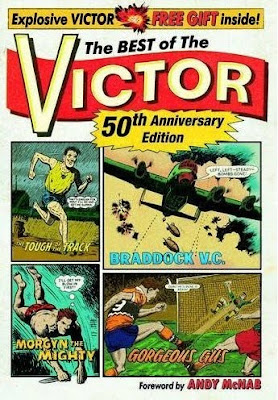 The Titan Books publications of Best Of Battle along with the individual Battle character books of Johnny Red, Rat Pack and Darkie's Mob have obviously not gone unnoticed by other publishers and, with a lull in publication of their thick Commando reprint books, Carlton have now scheduled The Best Of The Victor.

The Victor was first published by DC Thomson in February 1961 and was a boy's adventure weekly perhaps best known for featuring true stories of men at war on its front and back covers. Yet despite this regular cover feature it was by no means a war comic with other regular stories involving runner Alf Tupper, the Tough Of The Track, footballer Gorgeous Gus and DCT's long running Tarzan character, Morgyn The Mighty.

The Victor was by far the longest running of any of DCT's boy's picture strip weeklies and it was also the "last man standing" having absorbed Wizard, Hotspur, Scoop, Buddy, Champ and Warlord along the way before it came to an end in November 1992.

The Best Of The Victor will feature Victor comic strips from the early 1960s and includes a foreword by former SAS soldier Andy McNab and an introduction from DC Thomson's archivist Morris Heggie.

Carlton will be releasing The Best Of The Victor under their Prion label in time for Christmas, with Amazon giving a release date of 4 October 2010. The cover price will be £16.99. (With thanks to Morris Heggie.)
Posted by Jeremy Briggs at 7:00 am