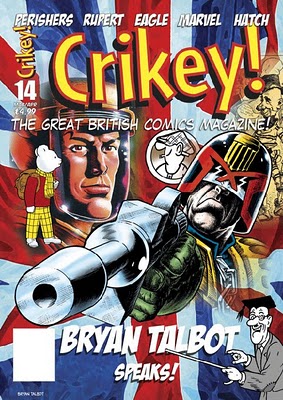 The latest issue of British comics magazine Crikey! is out now and comes packed with a huge range of articles, including an interview with top comics creator Bryan Talbot and a timely tribute to the origins of Eagle comic, which celebrates its 60th anniversary next month.

Behind these 'headline grabbing' items (and a great cover from Bryan) are features on the wonderful The Perishers (which the Daily Mirror has begun reprinting, ousting Pooch Cafe), an enjoyable celebration of Alfred Bestall's Rupert and an interview with ace creator and comics expert Lew Stringer, although Lew himself notes the choice of images chosen to illustrate the pice are odd, despite being sent a variety of scans of his work.

As usual, it's a mixed bag but while the loss of a colour section is the regrettable result of losing Borders as a distributor, the magazine's editorial team try hard to please. For me, the biggest failing is its final chapter of a potted history of Marvel UK which glosses over the company's huge success on UK news stands with titles such The Real Ghostbusters (which helped to launch the careers of Dan Abnett, Andy Lanning and many others) in favour of concentrating on some of its least successful titles.

While many of these, like the original Knights of Pendragon fully deserve their limelight, the article is disappointing. As with many features in this title, it could have benefitted from more interview material.

Despite my gripes, the Talbot and Stringer interviews and the Eagle tribute - and a feature on the much-maligned 1980s Eagle - more than make it a magazine to track down if you're a British comics fan.

• Crikey! No.14 will be available from many comic specialist shops or you can order it directly from the publishers via www.crikeyuk.co.uk/sub.html
Posted by John Freeman at 10:51 am