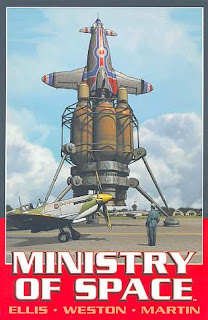 Warren Ellis' and Chris Weston's wonderfully retro Ministry of Space is available for a limited time from Forbidden Planet International for £5.39 - that's 40 percent off the usual price.

This is the 2009 paperback edition - 96 glorious pages.
Ministry of Space has, arguably, proved to be a bigger hit with Dan Dare fans than most recent Dan Dare revivals. Set in an alternative reality where Britain dominated the space race after World War Two but never underwent the social revolution of the 1960s the book is considered a must for sci-fi fans, comic fans and anybody who like a good tale well told.
Chris Weston, whose credits include Judge Dredd and Swamp Thing, is the artist on whose designs the new Dan Dare figures are based.
The book is available at the lower price until Wednesday 14th April 2010.