In Review: The Chimpanzee Complex - Paradox 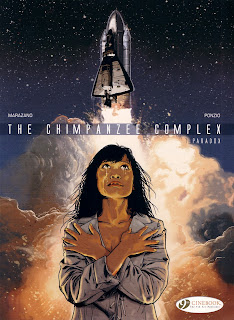 The latest science fiction offering in Cinebook's increasing number of translated bandes dessinee albums from France is The Chimpanzee Complex. Unlike Aldebaran or Orbital this is a story that takes place in the near future of 2035 and begins on a familiar Earth.

The US Navy recover an Apollo capsule from the sea off Madagascar which contains two men who claim to be Apollo 11 astronauts Neil Armstrong and Buzz Aldrin just returning from their 1969 mission to the Moon. Held in secret by a shadowy agency of the US Government, the men are questioned by NASA astronaut Helen Freeman who was scheduled to command the first manned mission to Mars before it was cancelled for financial reasons. The information given by the mysterious men takes Helen and her team into space and a landing on the Moon which suggests that more than was made public had been happening behind the cover of the Cold War space programmes of America and the Soviet Union.

This is the first of a three book serial by writer Richard Marazano and artist Jean-Michel Ponzio. In Paradox Marazano's plot builds slowly, leaving time for the back story of the cancelled Mars mission and Helen's daughter Sofia's thoughts on her mother's career keeping her away from Sofia to come to the fore. Ponzio's artwork, while apparently photographically based, is detailed and clear and his futuristic spacecraft designs are logically conceived. 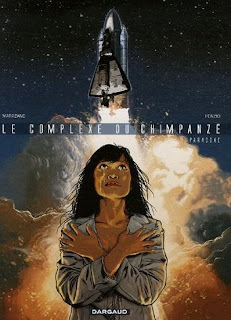 The "chimpanzee complex" of the title relates, not to a zoological building, but to the concept that the chimpanzees used by NASA in their early spaceflights were intelligent enough to know what was happening to them and to be aware that they could do nothing to stop it. They were trapped in the inevitability of the situation that they found themselves in. It is translated here into the plotline that Helen is effectively locked into a situation which takes her further and further away from her daughter, both in distance and duration, and there is absolutely nothing that she can do about it.
The book itself reprints the original 56 page album of Le Complexe Du Chimpanzé: Paradoxe which was published by Dargaud in France in 2007. The Chimpanzee Complex book 2, The Sons Of Ares, is due to be released by Cinebook in January 2010 with the third and final book, Civilisation, expected in the second half of 2010.

The Chimpanzee Complex has a mature storyline, devoid of sex or violence, that draws you into the plot and leaves you wondering just where the story will end up over the next two books.


• More details of the British edition are available on the Cinebook website.

• More details of the original French editions are available, in French, on the Dargaud website.
Posted by Jeremy Briggs at 1:57 pm