In Review: Aldebaran - The Catastrophe 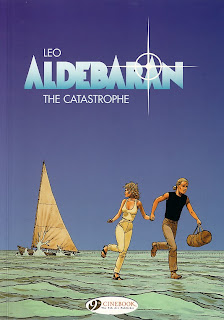 Created by a Brazilian and originally published in French, Aldebaran was never going to be that traditional a story for British bande dessinee publisher Cinebook to translate into English for the first time.

Set on the human colony world of Aldebaran 4 a century after it lost contact with Earth, it tells the story of 16-year-old Mark and 13-year-old Kim who are thrown together when their remote fishing village is destroyed by a strange catastrophe which appears to be associated with rumours of an unknown sea creature and the sea turning to jelly - hence the unusual cover of two people running on top of the water way from a sailing boat. Orphaned and friendless, Mark and Kim set out on the long journey to the capital Anatolia to seek work and a new life as well as some sort of explanation of the disaster, during which they run into a variety of strange people and dangerous situations.

Technology on Aldebaran has retreated to early 20th century standards with wooden vehicles and giant airships and this, coupled with the fantastical creatures the duo encounter and the quest nature of the storyline, gives the overall impression of a long languid fantasy novel rather than the short hard science-fiction stories of a bande dessinee series such as Sillage. 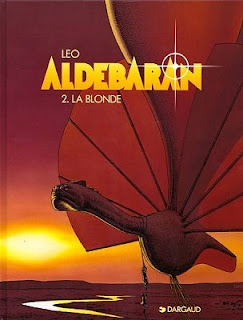 The book reprints the first two of the five Aldebaran albums, La Catastrophe and La Blonde which were originally published in 1994 and 1995. These are very much the first chapters of a much larger story, a story that took writer and artist Leo (Luiz Eduardo de Oliveira) five albums to tell and Cinebook plan to continue the Worlds Of Aldebaran sequence by reprinting the five albums of Aldebaran, as well as the five albums of the sequel series Betelgeuse, with each British book containing two of the original albums. Indeed this reprint book benefits from being a combination of the first two original albums since the lack of explanation of the events in The Catastrophe could have left the reader wondering whether there was any point in continuing with the story. The Blonde however moves the story on with the introduction of a dangerous government official and the suggestion that Alexa Komarova, the blonde woman of the title, is not entirely human.

Despite being listed by Cinebook as a 15+ age group book, a short sequence in The Blonde originally showing Alexa topless has been censored for British publication. The book notes that this was with the agreement of the creator and it is done so neatly that it has to be said that without that note the censorship would probably have passed unnoticed by most readers.

In the two albums Leo introduces the reader to a wide variety of characters, many of whom will presumably never be returned to, while leaving the background to The Catastrophe a mystery waiting to resolved. Although his art is detailed it all too often feels static which does detract from the action sequences but events in The Blonde bolster the story considerably and give the impression that a commitment to the ongoing story will reap benefits for the reader in the long run.

• More details of foreign language bande dessinee albums that have been published in English can be found on the Euro Comics Translations website.
Posted by Jeremy Briggs at 5:17 pm

i love this comic, but never will buy a cinebook censored version.