Review: The Most Natural Thing in the World by Frances Cassavetti 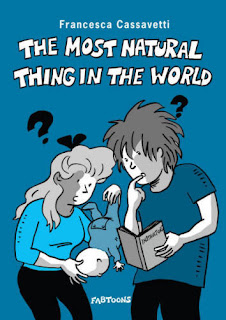 Ok, here goes... The Most Natural Thing is a joy. One of the best comics I've read all year.

There. Job done. Time for a full English and a steaming hot mug of tea (it's cold, in case you hadn't noticed)... what's that? You want to know what makes this one of the best comics I've read all year? Awkward sods. Okay, let's try that again...

The Most Natural Thing (and Francesca admits that, in future, she's going to choose shorter titles for her comics) is a 96-page collection of Francesca's mini-comics of the same title, originally published and released in four installments. It's presented with a bonus story, Shadow of the Curriculum, that is, in itself, a tiny masterpiece and which perfectly complements the material that has come before.

The Most Natural Thing is Francesca's account of the difficulties inherent in deciding to have children, getting pregnant, giving birth and taking your first, few fumbling steps as a parent. Francesca doesn't pull any punches in her depiction of the stresses and strains of childbirth and parenthood. That's not to say that The Most Natural Thing is depressing; far from it, in fact. Francesca often manages to see the humorous side of even the most traumatic aspect of parenting, such as when mum and dad spend hours trying to calm their screaming baby, only for said baby to finally stop crying when they are both in tears themselves (trust me, it's funny on the page).

Inevitably, there are going to be two types of readers for this collection: those, like me, who are parents already and who laugh in recognition at the mistakes the two lead characters make as they negotiate being a mum or a dad for the first time. The second group of readers will be those who have yet to have children and, indeed, perhaps never will.

For the former group, The Most Natural Thing is all about recognition and memory; suddenly being transported back to that point when you had a new-born and life took on a slightly hyper-real quality (or was that just the sleep deprivation?). Most parents will, I think, be able to remember inadvertently waking their new-born because they were checking her to see if she was still breathing. I'm sure they will certainly remember the hours that it took to then persuade their baby to get back to sleep.

For those readers who do not have children, The Most Natural Thing provides a glimpse into a world that they are probably familiar with and may have been on the periphery of, but are unlikely to have engaged with fully (I suspect that there's nothing more boring to non-parents than proud mums and dads; a fact I try to remember to stop me from becoming a dad bore). The warts-and-all nature of The Most Natural Thing's portrayal of parenthood makes me think that it should be a set text for secondary schools as part of their sex education programme. It's a very balanced account; The Most Natural Thing shows the positive as well as the negative aspects of parenting and there's a sense in the comic that each low that comes your way as a parent will be balanced by an equal high.

In short, The Most Natural Thing is a triumph, with an insightful, witty script and easy on the eye cartooning. The bonus strip, Shadow of the Curriculum, shows how your priorities shift when your children become teenagers and is a welcome addition to what is already a very strong collection.

This comic is a must-buy for parent and non-parent alike!

• Frances Cassaveti's blog is here and her website is here.
Posted by Matt Badham at 10:42 am