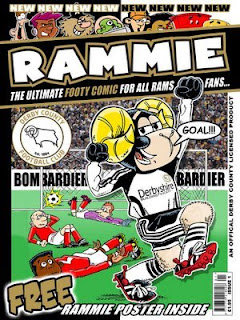 With a cover price of £1.95, the comic is the brainchild of Pete Wildrianne and Clive Ward of Comic Football and is produced in association with Derby County football club -- hence the name. Comic Football hope other football clubs will sponsor their own version of the comic (with an appropriate title for each version), with specific content for each club and copies available at their grounds.

The line up of comic creators on the title is impressive. downthetubes readers should already be familiar with Nick Miller, co-creator of The Really Heavy Greatcoat, which features on downthetubes and in Comics International but who has worked in comics since the 1980s on a wide range of titles. Lee Healey is the co-creator of the highly acclaimed Drunken Bakers for Viz, and creator of strips such as Sporting Swine.. Nick Brennan has been working in comics for almost 20 years, and like Duncan Scott, his credits including strips for The Beano, while Lew Stringer has surely drawn strips for pretty much every humour comic published in several years, but whose latest Beano strip, Super School, is proving a runaway hit with its readers.

"Three further issues will follow in February, April and June 2009," Pete Wildrianne says. "Derby County are purchasing a quantity to sell in various outlets, as well as giving [about 3000] copies to their junior club members."

The comic is being distributed wholesale through the news trade with Smiths News and Club Fottball are exploring further direct sales opportunities.

"Cynics who claim there is no longer a British comics industry should consider that recent months have seen the launch of comics with all-new content such as The DFC, Marvel Heroes, and now Rammie," comments contributor Lew Stringer on his blog, "not to mention additions to the Classical Comics line and the publication of Bulletproof No.2. They thought it was all over... but it isn't now!"