The Return of Classics Illustrated 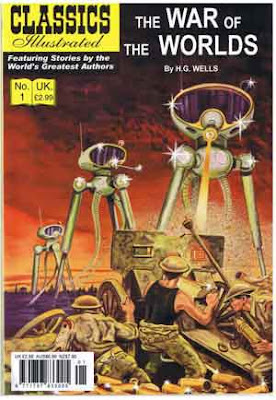 Classics Illustrated (originally Classic Comics) was an American comic book series which ran from 1941 to 1971 and featured comic strip adaptations of literary classics ranging from The Time Machine to Moby Dick and Romeo and Juliet to The Jungle Book. Each issue featured stunning artwork and benefited from superb scripting.

169 issues were published in all, along with a Classics Illustrated Junior title featuring fairy tales such as Snow White and the Seven Dwarfs for younger readers.

There have been various reprint versions of Classics Illustrated and the original British version ran for 162 issues and included 13 stories which had not formed part of the original American run.

Now, Classics Illustrated and Classic Illustrated Junior are back on the shelves of British booksellers and newsagents. Jeff Brooks, a collector and dealer of vintage CI issues, has re-launched the two titles through his company Classic Comic Store Ltd.

The books are licensed from Jack Lake Productions Inc of Canada (JLPI) who hold the copyright on behalf of First Classics Inc. and Jeff is able to release his magazines in the UK, South Africa, Australia, Ireland and beyond.

We are delighted that Jeff has agreed to share his thoughts on his new venture with downthetubes' Ian Wheeler.