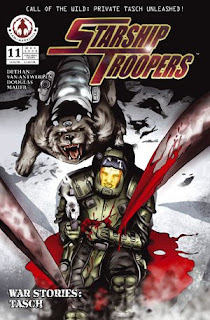 AAM/Markosia, British publishers of the hit series Kong: King of Skull Island, Starship Troopers and the critically acclaimed The Boy Who Made Silence, have announced the release of a Starship Troopers one-shot this coming December, War Stories: Tasch, scripted by the talented Cy Dethan with art from newcomers Neil van Antwerpen and Peter-David Douglas.

"War Stories: Tasch is essentially an "origin" piece," explains Cy Dethan. "Before signing up for Pathfinder training, Private Naomi Tasch was a specialised sniper, working alongside a Mk-II combat Neodog. Neodogs are genetically and cybernetically altered animals with enhanced intelligence and physical attributes, linked to their handlers through a complex set of implants.

"During a full-scale planetary evacuation, Tasch's Neodog partner goes missing and she puts her career and life on the line to find him. In doing so, she demonstrates the loyalty, single-mindedness and raw brilliance that will one day make a Pathfinder out of her."

War Stories: Tasch is van Antwerpen and Douglas's first published work. "We've shared a common passion of creating comics for as long as we can remember," said artist van Antwerpen, "After years of honing our skills on personal projects and small press books the break finally came when publisher Harry Markos offered us a one-shot Starship Troopers issue written by Cy. Needless to say we took it!"

"We'd both read Cy's Bad Blood story arc which was drawn by Paul Green and thought it was incredible," said inker Peter-David Douglas, "so it's thrilling for us to be involved in a project like this. We hope that it will be a springboard to regular work in the industry, something we've worked very hard towards."

Launched in 2005 AAM/Markosia has been a leader in the independent publishing field. 2008 marked their most ambitious campaign to date as the company debuted a range of new titles, with many more to follow in 2009.
Posted by John Freeman at 2:34 pm

For those that want more of a taster part one of Cy Dethan's Bad Blood storyline is available to read for free at www.myebook.com.

This arc is the introduction of Vanauken's Vandals, the pathfinder unit to which Tasch belongs.

There is also more info, art and background material on the series at www.cydethan.com