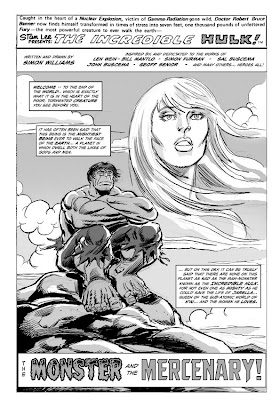 Apart from a cameo confrontation between Death's Head II and the Incredible Hulk in Marvel UK's Shadow Riders #1 (a little in joke on the part of myself and co-writer Brian Williamson, at the expense of the often maddening demands of editor in chief Paul Neary to have as many Death's Head II appearance in MUK early 1990s books as possible), it's amazing the two characters have apparently never met in the 'real' Marvel Universe.

While it's incredibly unlikely such an encounter ever will happen (which we all here at downthetubes think is a downright shame), comics artist Simon Williams has at least stepped up to the plate and is delivering an unofficial encounter between the original Death's Head and the green-skinned behemoth over on his deviantart pages.

"I thought some of you older Marvel UK fans may get a kick out of this," he told Marvel UK fans on the make Mine Marvel UK Facebook group. "It's a comic strip that just started out for fun... but has since taken on a life of it's own!

"It features a battle between two of my all-time favourite characters: Death's Head and the Incredible Hulk... a fight I've always wanted to see done in comics, but the likelihood of it happening seemed like zilch. So I thought, well.. since I've drawn both characters professionally, why don't I do it?

"It started of as just a couple of pages that I'd posted up on my Deviant Art page, but has since then became pretty popular... with people often emailing me asking when I'd be doing more! Seeing as it's set in the Hulk's past, I decided to draw it in a style much like the old Marvel UK comics from the 1970's... hence the grey-toning."

The art is a wondrful tribute to the Hulk strips republished by Marevl UK bac in the 1970s and 1980s and well worth checking out. Plus, it's Death's Head -- what's stopping any MUK fan from checking that out?

I'd just like to say a very BIG thank you for your very kind words regarding my strip, guys! I'm glad you're enjoying it, and hope you like what's going to happen in the rest of the story, yes? ;o)