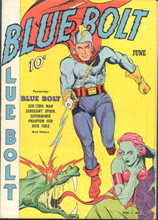 Titan Books have announced the acquisition of the rights to a series of books celebrating the life and work of US Golden Age creator Joe Simon and his collaborations with comics legend Jack Kirby.

The first volume in the set, scheduled for Spring 2009 release, is an illustrated autobiography, Joe Simon, The Man Behind the Comics, followed by The Best of Simon & Kirby, a deluxe hardcover collecting Joe Simon and Jack Kirby’s work in a variety of genres including superhero, crime, detective, and western comics as well as the first romance comic books.

These will be followed by The Simon and Kirby Superheroes, which will feature such costumed heroes as Blue Bolt, Fighting American, Stuntman, and the Fly. These volumes will be compiled with unprecedented access to rare archival material plus exclusive contributions from Joe Simon - and most importantly, these will be the only editions authorized by both Joe Simon and the estate of Jack Kirby.