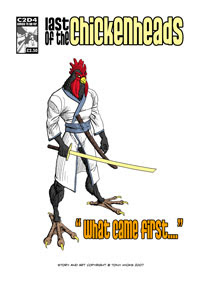 Last month, newly launched publishers C2D4 (an aliteration of Comics To Die For), the brainchild of Essex-based duo artist and writer Tony Wicks and writer Martin Buxton launched their first three titles: Last of the Chickenhads, Jack in the Box, and Crowman.

They've very kindly sent downthetubes copies of the comics and I'm delighted to report that all three are a great read, encompassing three different genres with panache.

Fans of Active Images brilliant Elephantmen might see some similarities between that and c2D4's Last of the Chickenheads, a tale of Samurai chicken Frank and his adventures in a world full of animal/human hybrids in the wake of a plague that has devastated the planet. I'd argue this is much lighter fare, with a tip of the hat to films such as Tremors as mutant conckroach attack rather than Richard Starkings highly charged four colour epic.

Tony Wicks delivers what could easily be a one-off story of a warrior chicken, blending some complex storytelling with an enjoyable art style. There's plenty here to enjoy and enough threads left hanging for new stories. 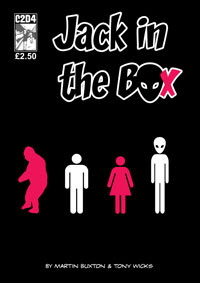 Jack in the Box is the story of two children taken from the their families as babies and brought up in radically different worlds. I have to confess I found this the weakest of the three titles, with a script that left too many questions than necessary, although again, the art is accomplished and atmospheric, refeclting the disturbing nature of this unsettling horror tale.

For me, I think that while less "bang for the buck" than Last of the Chickenheads, Crowman is my favourite of these new titles, set in a sleepy mid-western town at, I'm guessing, the turn of the century. The title's hero, Crowman, is both clever and intirguing, with a mystery enemy that is equally tantalising without being too frustratingtinly enigmatic. There are also the kind of story threads worthy of an episode of Twin Peaks to complement the main plotline and I particularly liked Tony's stark yet vibrant art on this title. 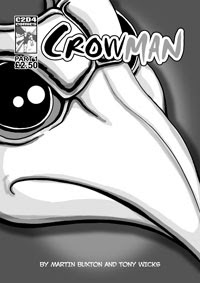 If I had to make a guess, I'd say Last of the Chickenheads may prove C2D4's best selling title but for my money Crowman is the title that will ultimately attract the attention of a wider audience. There's a strong, inventive team working on these books and I look forward to seeing what happens next.

• For the lastest information on C2D4, visit the official web site: www.c2d4.com
Posted by John Freeman at 11:07 pm