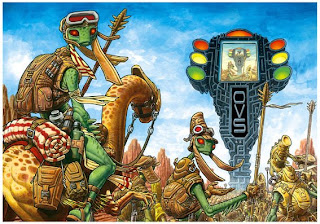 The latest issue of Omnivistascope, Paul Scott's stunning-looking SF anthology comic, was released at the Bristol Comics Expo last month but what with one thing and another -- among other things, scripting Ex Astris, writing a story for an upcoming Misty anthology and the day job at ROK Comics -- I have only now had chance to post a review.

Such laxity is a disservice to the OVS team, because each issue of this indie just gets better and better. While I do at times find some of the scripting in need of some stronger editorial rein, the art throughout this 80-page extravaganza is awesome, so much so that it makes you weep that there are so few fully professional outlets in British comics for these talents to be financially rewarded for their great work.

While my favourite story of the issue is probably the spooky Holy Island written by Ben Clark, with art from Chris Geary - a cheery tale of a relentless zombie attack on a northern isle! - it's the cover art and interior strips drawn by Paul McCaffrey that proves, for me, the icing on the cake of this excellent title.

Editor and main writer Paul Scott consistently delivered a brilliant comic in the form of the award-winning humour title Solar Wind in the past but now he's turned his attention to, for the most part, more serious fare on OVS, he's producing an even higher quality comic. Mixing a range of strips, with art from the likes of Chris Geary, Ian Stacey, Beyan Coyle, Mike Donaldson and others, with features from authors such as the ever reliable Ed Berridge (an enjoyable Jeff Hawke retrospective) and Ben Clark (who provides a splendid feature on the TV series Dark Shadows, currently screening on digital TV in the UK), OVS is a delight, pretty much from cover to cover.

As I said, given the sheer number of scripts Paul himself has written this issue, I do have some concerns as regards plotting and pacing, but tales like The Bodyclock Murders and Juggerman -- surely a character ready to become standout -- are a great read as well as pleasing on the eye, and the continued appearance of Space Lord more than makes up for any inconsistency - a funny strip where the spirit of Solar Wind lives on.

Overall, Ominivistascope is an excellent indie title, well worth tracking down, or, if you're a comic shop, stocking. It's always a pleasure to read and the team consistently raise the bar on this title with every new issue. Recommended!

• You can buy Omnivistascope from the OVS shop online. The price is £3 plus £1 postage in the UK (please enquire for Europe and the rest of the World) and you can pay by PayPal or cheque, visit the OVS Shop for e-mail and real world addresses.
Posted by John Freeman at 11:45 pm