Prisoners of Time: An Interview with artist Lee Sullivan 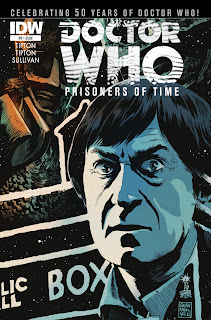 (Updated 25/2/13): British comic creators will be heavily involved in US publisher IDW's Doctor Who at 50 celebrations for their 'Prisoners of Time' maxi series, which launched  last month with a First Doctor story drawn by Simon Fraser.

'Prisoners of Time' will feature every incarnation of the Doctor, as well as a long list of villains, including the Ice Warriors in Issue 2 and the Zarbi.

downthetubes caught up with Issue Two's artist Lee Sullivan, who has a long-standing connection with Doctor Who dating back to the 25th anniversary comic story Planet of the Dead for Doctor Who Magazine, which featured every Doctor to date. His Daleks are considered second to none by most Who comic fans, but Ice Warriors featured in the Radio Times Doctor Who strip he drew.

downthetubes: What have you been up to recently as an artist?

Lee Sullivan: Nothing in comics. Mainly, I've been working in educational publications for people like HarperCollins, although I have drawn a mini Eleventh Doctor comic-strip for the forthcoming Royal Mail stamps release, which will be included in the premium package, and will be providing Who art for a forthcoming BBC Worldwide Celebratory something-or-other. I'm also providing illustrations for Dan Freeman's Minister of Chance SF audio drama.

downthetubes: How did you gain the commission to draw the second issue of 'Prisoners of Time?

Lee: I'd been in contact with commissioning editor Denton J Tipton for a while, and he finally found something he thought would suit. I am apparently a 'contemporary' Second Doctor comics artist, which I think decoded means 'last surviving' artist who has drawn Troughton (in 'Land of the Blind' for Doctor Who Magazine back in 1995).

downthetubes: This isn't your first Doctor Who project by any means but it does, I think, mark a return to the character for you after a long absence?

Lee: The last strip I drew for Panini was 'Children of the Revolution' in 2002, but since then I've produced art for the BBC webcast Shada in 2003 and the Ninth Doctor drawings for the BBC's website to tie in with 'The Empty Child' and 'The Doctor Dances' episodes. Then, between 2006 - 9, I drew all but one of the Tenth Doctor strips for Fabbri's 'Battles in Time' Magazine. Subsequently I provided line art for Fabbri's 'Doctor Who DVD Files' from 2009 till 2012 which were converted into digital paintings by artist Tom Connell. Also, last year I provided a digital painting for the current Who Annual. So, hardly any Who involvement at all!

downthetubes: IDW are keeping their cards close to their chest about the story, but can you tell us which villains feature in the story?

downthetubes: Are they a monster you enjoy drawing?
Lee: Yes, though they aren't exactly masters of emoting, facially. You can give them a little body language, but even that's limited. I have actually shown them running in this one, which may be a first.

downthetubes: You're well known and highly regarded for you work on DWM's Dalek strips. What's the secret to drawing them?

Lee: Attention to detail, really, for my style of work. I tried to get all the subtle angles and shapes right, but if you look at TV Century 21 Dalek artist Ron Turner's stuff they are all over the place, but none the worse for that! I've been experimenting with Turner-style Daleks recently for a possible future project . . .

downthetubes: A project like this inevitably attracts comments over likenesses, do you find that limiting given the freedom you have on other projects?
Lee: Likenesses are always a problem because the closer you get to them in terms of photographic reference, the less likely they will fit with the drawings that don't use photo reference.

This time around, I was able to use screen grabs from 'The Krotons' which opened up a lot more (consistent) reference opportunities, but even so, it's always a bit of a nightmare. I suppose I've worked on so many projects that require likenesses one way or another that I don't really notice the difference any more!

I met my long-time comics hero Mike Noble a few months ago and looking again at his marvellous work was reminded how important dynamics and body-language are to storytelling, so I've tried harder than ever to get the character's body-language and gestures right. It's also forced me to sharpen my clothing-folds technique. He really was (and remains) an absolutely consummate artist.

downthetubes: Will you be doing more Doctor Who projects for IDW after this one?
Lee: I suppose it depends on how well the guys there like what I've done! I'd certainly like to, they're a nice bunch. I've offered to continue to lend an older & British 'ear' with regards to dialogue for the rest of the series, as it's so hard for the US writers to get the odd nuances of British actors - especially from the past - so verbal anachronisms turn up, which is ironic considering we're dealing with a time-traveller, but they do.

downthetubes: Has the way you draw comics changed since you first drew Doctor Who and if so, what's the biggest change?
Lee: Without doubt, the digital revolution. Not just in terms of sending artwork (we used to use the post or Federal Express and hope for the best) but in producing the art. I now work with Manga Studio and Photoshop, and use a tremendous piece of kit - a Wacom Cintiq 24" HD graphics tablet, which means you draw or paint directly on the screen with a stylus. For years now I've edited my scanned artwork in Photoshop and now with Manga it's possible to do the whole thing digitally, should you wish to. Thumbnails, roughs, reference, finished pencils, finished art and maybe colour all in the one file. When time is very tight, it's an amazing advantage.

downthetubes: 50 years of Doctor Who - what do you think is the key ingredient that's given it such longevity?

Lee: A very simple but amazingly flexible format: interesting guy solves mysteries with his pals at any time and in any place.

downthetubes: What's your next project?

Lee: I have no idea. Though there are some projects indicated in my previous answers. Offers, please :)

To expand: Don't think you'll get rich or have a normal 9-5 daytime job (unless you're way more disciplined than me) and do expect a bumpy ride. But if it's what you do best, then I suppose you're doomed :)

• Read our interview with Simon Fraser, who drew Prisoners of Time #1

• Doctor Who: Prisoners of Time #2 written by Scott and David Tipton with art by Lee Sullivan is on sale from 30th January from IDW Publishing.

• More about IDW's Doctor Who range on the official web site

• Read an interview with David and Scott Tipton about the maxi series on Comic Book Resources
Posted by John Freeman at 7:00 pm